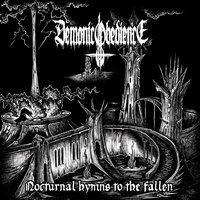 The phenomenon of one-man bands has been on the rise ever since the advent of decent home-recording equipment. While there have been some great and notable one-man acts over the years (Dan Swanö’s Moontower, the insanely overlooked Dead Silent Slumber project by ex-Naglfar/Thyrfing frontman Jens Rydén as well as Taake and even the controversial Burzum just to name a few), the fact that anyone could do this at home meant a whole slew of pure and utter garbage was put out there.

Nocturnal Hymns to the Fallen is fortunately not one of those unlistenable lonewolf-turds, but to be honest it isn’t all that exciting either. While the album has some good parts and is tight and reasonably well produced, it is still just too home-made. The programmed drums are probably the first thing to take note of. Unless you’re a huge fan of that computerized drum sound, this is going to bother the hell out of you. What with ”humanizing” and randomization of velocity and such tidbits that are standard fare of any digital drum plugins these days it is a cakewalk to make it more alive than this. Unfortunately, even the guitar sound resembles some standard metal setting straight out of your favourite effects plugin. Even overlaid with deep guttural growls and raspy blackened vocals it somehow manages to sound monotonous and dull.

But hey, the album does have some good parts too. The lone ranger of Demonic Obedience, George Ntavelas, is not unskilled when it comes to writing riffs and putting them together as songs. The opening ”Create the Shapeless” is charming as a simplistic doom/death/thrash hybrid, and the tracks ”Impermissible Irreverence” parts 1 and 2 deserve to be mentioned here too. All in all though, this is an album that would have benefited from the input of more than a single band member both when it comes to the ideas as well as the execution.