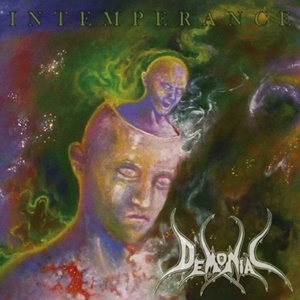 Not the New Zealand blackened group that would turn power metal from the late 1990’s and spawn Dragonforce, this four-piece from Chile arrived on the scene in 2011 and have two demos plus an EP under their belts before signing to Witches Brew for a full-length. Demoniac deliver a blistering thrash assault for Intemperance that swirls at relentless riffs and pounding tempos that contain an underground, go for broke quality with blackened/death nuances.

The no holds barred attack comes at the listener in dynamic output – opening a song with a furious 13 second drum solo (“Dimorphic Feelings”), a classically-driven acoustic instrumental placed near the conclusion of the record rather than as an opener (“Timeless Mind”), or even sequences that possess a bit of that throwback, nursery rhyme feel (the riffing/tempo combination for 3:14-3:44 of “Forging Our Sorrow”). Many of the explosive runs and lightning fast snare/tom fills take the offspring of Slayer to that heightened level – the type that put bands like Sacred Reich, Sadus, and Kreator on the map. The vocals match the rapid-fire music, barking out commands with sharp uniformity during the chorus of “The Unacceptable Truth”, while some of the transitions and gallops lunge back into Forbidden-land. The blackened/death edge appears in specific phrasing of riffs or savage screams, plus the production values reside in that analog, plug in and play together mold – even when you get a bass solo for the title track, you feel like you are in the rehearsal room capturing Demoniac in their element.

The brief times that the quartet feel the need to be more mid-tempo or controlled showcase some of their older classic metal affinities. During “Cheating Destiny”, guitarists Nicolas Young and Javier Ortiz put on a clinic of Maiden-esque proportions, unfurling all these melodic twists, turns and speedy lead breaks that make this five-minute plus instrumental one to treasure. Kudos as well for a head within head cover, atypical for a genre best known for skulls and blood/war-torn themes. Affirming South America’s affinity for metal, Demoniac stand up for the thrash movement with a killer album in a tidy 40 minutes – sure to stoke the fires for their future.