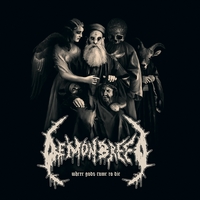 Lots of the old school Swedish death metal continues to find its way to the inbox on an almost daily basis. Much of it sounding in such a way that it’s not even worth writing up – a simple copy/paste from the archives would suffice to get the point across. Demonbreed does not fall into that trap, and provides a solid romp of the good ole days for those who don’t tire of the sound.

First things first, Demonbreed get the thumbs (horns?) up for not being a blatant carbon copy of Entombed/Dismember/Grave. It goes without say that the guitar tone is that of a buzzsaw, but somehow it avoids those very treaded waters. Instead, the first two bands that come to mind with Demonbreed are early Hypocrisy (pre-The Fourth Dimension) and the heavier and gut-punching moments of Edge of Sanity. The vocals are that authoritative low growls that feel very Obsculum Obscenum in their demonic glory, as does the thick, bludgeoning guitar tone that gives it a visceral bite. The more melodic moments, such as the mid-tempo “Revenge in the Afterlife” have the early Edge of Sanity stomp referenced earlier – some fun, headbanging stuff. Speaking of EoS, there’s a cover of “Blood-Colored” that perfectly reflects their influence (admittedly they can’t touch Swano’s cleans though). The tempos are suitably varied throughout as well, moving from blistering and crazied (“Red Countess”) to the groovy “Summon the Undead” with effective fury.

The noted influences keep Demonbreed apart from their fellow OSDM brethren. One could still argue the originality point, but the bottom line is that Where Gods Come to Die is more than competent in its execution and a rollicking good time. What else do you really need from an album such as this?