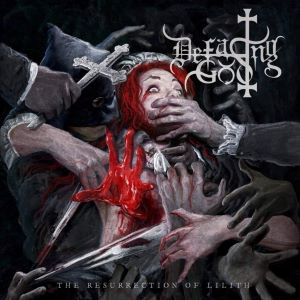 A new face on the Napalm Records label, Defacing God are a melodic death/black metal band that formed back in 2015.  Their full-length debut, The Resurrection of Lilith centers on the titular female demon in a multitude of ways as a means to direct their dark yet still melodic music.  Fans of acts like Cradle of Filth, Fleshgod Apocalypse, and Carach Angren should have a pretty good impression of what to expect, and the band sticks to its guns with the formula, for better or worse.

That symphonic extremity that has popped up more and more over the last decade or two is what Defacing God is aiming towards.  The band’s spin takes the sweeping orchestrations and bombast and turns its ear more into death metal territory than straight-up black metal, but that’s really the only tweak, and it’s far from innovative in 2022.  So what counts then, since we all know there’s still 5,000 bands playing old school death metal and succeeding.  What works for Defacing God is their sense of balance.  This doesn’t sound much like a debut, but rather a more veteran band’s attempt at merging these two potent forces.  The symphonies are grandiose and epic in tone, as well as keeping that distinctly dark flavor to them to keep it firmly in the extreme realm.  But atop that feeling is an occasionally throttling bout of death metal that is keen to rack up some carnage.  One of the strongest examples of this is the absolutely raging “Enslaved,” where the orchestrations act as more of a backbone to the band’s riffing onslaught, and it successfully pulls off being a symphonic bonebreaker.  In the name of balance, the synths rise to the occasion in the more melodic “Rise of the Trinity” alongside engaging guitarwork and a rather catchy chorus and finale.  Closer “Into the Mist of Memories” wraps everything up nicely at the end, from blastbeats and pounding riffs to more gentle yet foreboding melodies and bombast.

Symphonic extremity may not be a new flavor at the end of the day, but Defacing God’s debut is an enjoyable romp that fans are bound to eat up.  The death and black line blurring should be beneficial the more the band advances their sound, with melodies being their secret weapon.  The Resurrection of Lilith is a solid debut that points towards an even brighter future for the band to capitalize on.