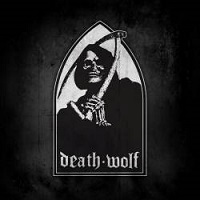 Originally conceived as a Misfits and Danzig cover band under the Devil’s Whorehouse banner, Sweden’s Death Wolf have proven incapable of shedding the influence of the pint-sized singer whose name was taken after Poland’s second largest city. Thankfully, the band doesn’t hold back when relaying their affinity for all things Danzig-related, having gradually morphed from a pure cover band, to an original band that played their own songs that sounded like covers as Devil’s Whorehouse, to a band still doing originals, but sounding far less like a cover band as Death Wolf. Progress is incremental with these guys, clearly.

II: Black Armoured Death is the band’s second album (duh), featuring one Morgan Håkansson of Marduk fame in the ranks. Musically, the Swedes don’t drop to dumbed-down punk territory as one would predict, as there’s a nice mish-mash of metallic punk being tossed about. The riffs are largely angular, yet simple, engaging in the sort of natural, tonal, organic rock/metal that Danzig has made a living off of. The most hardy cuts that expand upon this are “World Serpent,” the raucous (and down-and-dirty) “Malice Striker” and the title track, which must be up Hakansson’s alley of speed. Dude is in the lightning-fast Marduk, after all.

Because of singer Maelstrom’s noticeable vocal aping of Danzig, fiends (get it?) will have no trouble dipping in the bloodied pool Death Wolf has open on II: Black Armoured Death. There’s not a lot of versatility here, yet there doesn’t have to be. There’s a playbook to be followed and a man to be recognized. Oh Danzig, you probably love the adoration.