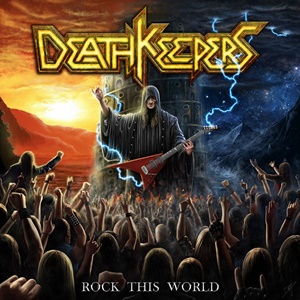 Born to the scene in late 2011, Spain’s Death Keepers aim to keep the 80’s heavy metal sound alive. Releasing an EP in 2013 with On the Sacred Way, they’ve had time to develop their material and maintain a steady lineup with drummer Miki Hunter since 2015. Rock This World contains eleven tracks of anthem-oriented arrangements, featuring big, booming choruses and supplementary heavy riffs and energetic lead breaks that galvanize audiences. Not as if the pointy logo, red-colored axe and lightning strikes emanating from the cover wouldn’t clue you in to this quintet’s sonic stance, right?

The instrumental “Thriving Forecast” features a slower, subtle arrangement with alluring keyboards and bluesy riffs, opening with acoustic guitar lines before transforming into something emotionally engaging, featuring exotic lead break textures and tradeoffs in a Gary Moore/John Norum-like vernacular. Stretching their fiery twin harmony wings a la Iron Maiden, “Wildfire” is a second-half favorite, the gang-oriented chorus serving as a foil for Dey Rus’ higher pitched, Kai Hansen-oriented vocal melodies. Classical touches for the bass/guitar serve and volley on the 55 second “Invention IV”, while motorcycle engine revving signals the start of the record on “Rock & Roll City”, a heads-down power number in line with 80’s Judas Priest or Accept. Death Keepers excel at that mid-tempo build up arrangement, where the excitement builds through guitar and vocal tradeoffs – “Fire Angel” convincing through it’s “Holy Diver”-ish main riff and soaring moments during the Eddy Gary/Antonio Maties lead break back and forth action.

There are growing pains to be had, for Dey has English enunciation issues that hopefully can be smoothed out over time (the aforementioned “Fire Angel” sounding more like ‘Fire Anger’ in the chorus), and often the band get rather repetitious on the chorus four times over per song – but these aren’t deal breakers to the enjoyment of these tracks. Ending on a lengthy note for the 8:49 power ballad “Smooth Hit Love”, Rock This World puts Death Keepers in that 80’s Teutonic meets American metal classification – a classic, song-oriented stance that probably possesses more staying power for those 35 and older.