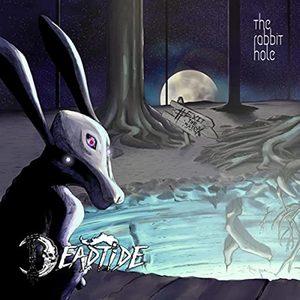 Having caught Deadtide a few times live at this point over the years, it’s been nice to see their growth within the melodic death metal spectrum. The New York/New Jersey-based act has always embraced the older styles of melodeath, but as they have continued to grow, now reach into more modern and unique territory. The Rabbit Hole, as their first full-length, encapsulates that idea perfectly.

Hearing some of the older songs now rerecorded along with plenty of brand new cuts, it’s a great introduction for those who have not had the band on their radar. “Stargazer Syndrome” champions that older Gothenburg style riffing, with gorgeous melodies hand in hand with more frantic tempos. But the inclusion of some gentle keys in the background and some mellow moments (which also feature clean vocals) bring the band up to more modern times – giving them a playful mix of new and old to work off of instead of being rooted in one direction or the other. “Relentless” likewise plays off that mix of bouncy, upbeat melodies with a driving metallic force behind them that’s sure to catch any melodeath fan’s ear. On the more modern side of the coin is a track like “Osmosis,” which still retains that same urgent riffing mentality but brings more of a focus to big, melodic moments that have a slightly proggier and pure heavy metal vibe. Of course, that leads us to the most melodic cut on the album, “Purpose.” A catchy and more power ballad-y track that eschews the growls (yet retains the occasionally chunky riffs) and allows vocalist Mike Mindnich showcase how far he’s come with his clean vocals. It’s a nice palette cleanser in the middle of the release that offers some room for exploration as the band continues on.

Managing to capture some full-on fury and metallic glory and taper it with some beautiful sounding melodies, Deadtide really make their mark with The Rabbit Hole. The biggest strength is that of the constant, ear-catching melodies – be they musically, vocally, or both – and that alone should sell the band to the greater masses. There’s not a track that goes by that isn’t chockful of them. All of the other bits of goodness you can discover is the icing on the cake that will propel the band forward. An easy recommendation for melodic death or modern metal fans.