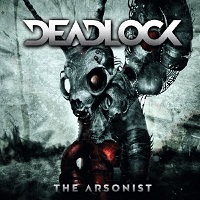 Not a lot of in-between for Germany’s Deadlock; they’re borderline Sonic Syndicate if you think about it, just with a female singer. Thus, the constant wrestling between extra-poppy female vocals and the crystalline sounds of modern melodic death metal is take it or leave it, with most of the band’s material being of the “take” variety. As it comes to be, The Arsonist is the band’s sixth album and first for Napalm Records, suggesting a bump in the rankings thanks to the Austrian label’s higher visibility than the band’s Lifeforce Records predecessor.

New male vocalist John Gahlert is much like the man he replaced Johannes Prem. Prem was designated as the muscle or the beastly side of the band’s sound, a role that Gahlert fills suitably, although one could make the argument that a lot of vocalists of this ilk (read: grunt, and grunt some more) are interchangeable. Therefore, Gahlert’s role is essentially to open holes for Sabine Scherer, whose piercing and pitchy vocals can hit upon some sweet spots (“The Great Pretender,” “Darkness Divine”), but also serve as a detriment, like on the throwaway ballad “Hurt.” (Why melodic death metal bands still insist on ballads and/or “slow jams” is puzzling.)

Discounting the cover of “Small Town Boy” from Bronski Beat, The Arsonist has its moments, like aggro pop gut-punch of “I’m Gone” or the agile “The Final Storm.” Tailor-made for the catchy sprawl and reach of Raunchy, Soilwork-lite, and In Flames-lighter, Deadlock probably won’t see an uptick in popularity with this one, yet someone’s gotta keep the good cop/bad cop thing going, right?