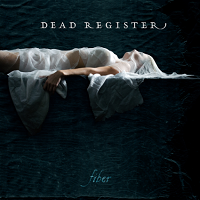 The Cure, or more specifically, Robert Smith, don’t usually get tied into the influence spectrum for bands as they should. After all, their fundamental, flow-y, dire proto-Goth, post-whatever (enough already!) works ala Pornography and Disintegration have found their way into many a subgenre related to metal. And while we’ve yet to see a true The Cure knock-off band, those who recognize, and abide by their sonic tenants can usually hold court, much like Dead Register.

An Atlanta trio founded in 2013, the band is led by the emotive clean vocals of M. Chvasta, who sounds like a Brit, but is certifiably alterna-Goth across the six compositions that comprise of Fiber, the band’s debut. They lead off the album with their best song, “Alone,” a sprawling, echo-y gem of a tune that is loaded with plenty of free-flowing melodies, jangly guitar lines, and Chvasta’s sullen vocals. Ample crunch in the guitar (and drum) department makes headway on the album’s title track, which, if you swiped out Chvasta’s clean vocals for a standard-issue growler, you’d have a rather generic post-metal number. But as noted, Chvasta is the band’s biggest identifier.

A bunch ‘o long songs here, so it’s sometimes a matter of letting Dead Register’s conventional riff approach to do its thing while waiting for Chvasta to introduce another down-in-the-dumps vocal line or guitar cascade. While one would wish for more flexibility in the guitar department (perhaps tacking on another player would help; an actual keyboardist, too), the pervasive amount of aura and atmosphere that runs through Fiber is enough to uh, register, Dead Register as legit.