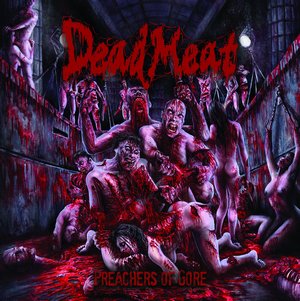 As if the cover art doesn’t imply it already, only the most brutal of brutal need apply for Dead Meat’s Preachers of Gore. This Portuguese brutal death metal act has been around since 1993, and have released a few demos and such, but 2017 actually marks the first full-length album to be completed by the band. Your enjoyment level of it though, will be directly dependent on how much you love Dying Fetus.

Plain and simple, Dead Meat take some significant cues from said groovy death metal act. Lots of mid-tempo, energetic riffs that occasionally slow down into more breakdown-y territory (don’t worry, pure death metal runs through their blood), and some faster and blast-ridden sections as well. Basically, the death metal playbook if you will. The vocals have that upfront and intense growl to them – very prevalent in the mix but never overbearingly so. Lyrically, it’s about what you’d expect given the ‘90s brutal death metal vibe, with songs like “Good Clean Cut” and “Fluids from the Infected Urethra” being more or less standard fare. Really, that is the biggest fault of the album – it’s essentially metal by numbers. It’s brutal enough, that’s for sure, but it never really connects due to the familiarity of it all. While it sounds ‘good,’ there’s never a super compelling riff or breakdown that makes you want to return to it after finishing.

Those looking for ‘90s brutal death metal a la Dying Fetus probably won’t have any gripes about Preachers of Gore. But for the rest of us, it more or less treads the same water that many other acts have done before, which severely limits its potential audience.