Daydream XI – The Circus of the Tattered and Torn (Sensory Records) 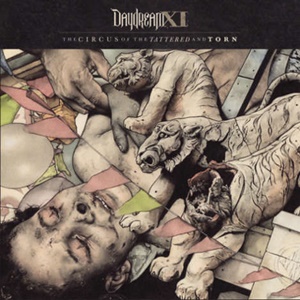 Embracing a no-holds barred sound in the progressive/power metal realm, Brazilian group Daydream XI formed in 2008 and released an EP and single prior to The Grand Disguise debut album in 2014 for now defunct Power Prog Records. Winning over audiences globally at the Progressive Nation at Sea cruise through Mike Portnoy’s invitation, they’ve also opened for Symphony X and Angra in their homeland. Choosing to sign with Sensory Records for the follow up, The Circus of the Tattered and Torn engulfs the listener in a dark, progressive conceptual effort that takes you on a journey through 11 tracks of twists, turns, beauty, and drama – heightening the deep dive which makes the genre exhilarating when executed correctly.

It’s the smaller details that can jump out at you – such as proper use of female support vocals along with stunning bass sequences during “Painted Smile” that make you feel like you are taking in an exotic soiree. The mathematical guitar sweeps against the thunderous drum triplets and galloping groove for “A Cup of Agony”, or the church choir element that opens “Collector of Souls” – these three specific instances allow Daydream XI to break conventional ‘progressive’ expectations for the needs of each song. The song flow starts with shorter material for the front half, as three of the final five tracks take up almost half of the 71-minute playback – but even that is stunning between the calmer 9:28 “Forgettable” (residing in that Evergrey class), the semi-jazzy “Overhauling Wounds” which features jaw dropping lead breaks and more potent, Latin-oriented tempo hits, and the 15-minute plus title cut that meets all of the requisite push/pull melodic moments and aggressive turns one could hope for in the finale.

When looking at the general framework of Daydream XI, stylistically they cross paths that convey everything from Evergrey to Symphony X, Angra to Shadow Gallery – unafraid to go full force if necessary, or lay back and allow melodies and harmonies to shine. There are many moments of magnificent, arpeggio/neo-classical flourishes to treasure (the keyboard break during “Trust-Forged Knife” one of this scribe’s personal favs), and the main vocals guitarist Tiago Masseti provides equal aural enticement – soulful, rich in texture as well as understanding the need to use lower, mid-range, and upper tier notes to squeeze out the stories in the right context. Even the cover art has a different motif – animals and a human face transposed in a jigsaw puzzle fashion with abstract color schemes.

Angra may be the leaders from Brazil in the progressive/power metal realm, but Daydream XI make a strong case for leapfrogging into that next slot- as The Circus of the Tattered and Torn takes you on that thrilling, mind-bending ride that this genre offers to most of its ardent devotees.