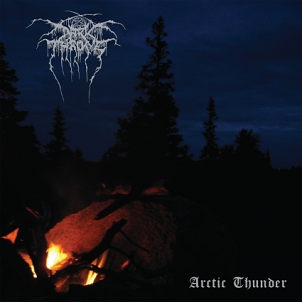 You’ll get a lot of the “going backward” talk with Darkthrone, something this scribe has uh, ascribed to as well. As total devotees of classic metal and its related sound and aesthetic, the utter lack of interest in anything modern has served Darkthrone well of late, with 2013’s The Underground Resistance emerging as one of the band’s better albums since their fabled ‘90s period. Certifiably no longer a black metal band, Darkthrone’s evolution/de-evolution continues with the equally-as-strong Arctic Thunder.

The nine songs on hand are centered on Fenriz and Nocturno Culto’s penchant for hulking, retro thrash riff tirades. The vertical buzzsaw of Culto’s guitars combined with Fenriz’s punk-centric time-keeping is now the foundation for Darkthrone’s sound, thus propelling opening jaunt “Tundra Leach” and “Boreal Fields,” which is a mighty turbulent number. As expected, a bouncy, if not downright catchy ‘80s groove is unearthed on the title track, a cut that would no doubt elicit a line of headbanging from the denim crew. Elsewhere, the churning “Throw Me Through the Marshes” (love the title) and primitive “The Wyoming Distance” straddled the appropriate line between halcyon thrash and extreme metal at its early tipping point.

The operative term here is “character,” something Darkthrone has rightfully maintained throughout its illustrious career. Toss in the fact that Mr. Fenriz is a character (see: his recent election to his hometown’s city council), and what you have is a band that transcends its original genre position. Arctic Thunder simply reaffirms the idea that Darkthrone are one of Norwegian metal’s absolute treasures.