Darkness – Over and Out (Massacre Records) 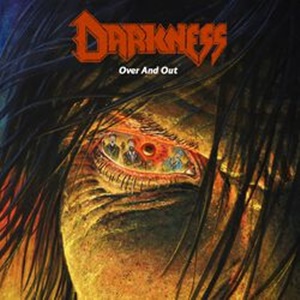 German thrash staple Darkness didn’t necessarily make as much of an impact on an international scale as they did in mainland Europe during the 1980’s. Probably due to being a second tier act on smaller labels, they broke up originally in 1991 and have reassembled a couple of times since. Active from 2013 onward, they’ve released a couple more studio albums and now have this interesting new EP Over and Out which introduces their newest bassist Ben to the fold. Choosing to record a mixture of new tracks, older songs reinterpreted, a live cut from Japan as well as a special Skid Row cover that fills out an almost short album timeframe at 30 minutes and change.

Taking in the three newest tracks first, Darkness has a smoother edge to their attack, but still very Teutonic in terms of finesse and extra nuances when it comes to building atmosphere and tension from part to part. “Every Time You Curse Me” for instance has this slow build-up with the guitar riffing before the stop/start aspects and heads down speed and power take hold along with the savage, gritty vocals of Lee (think a cleaner Tom Angelripper for comparison sake). “Dawn of the Dumb” contains some interesting spiral-like acoustic guitar work intertwined against the conventional mid-tempo electric riffing and solid groove mechanics – hopefully Darkness consider this a staple of their future live shows, as it’s got the right mix of heaviness and odd atmospheric twists to catch many metalheads. The title track has a lot of those militant drum/guitar salvos and crunchy/catchy guitar passages that make for incessant headbanging, plus proper gang-oriented background vocals in all the right spots. Of the other songs, “Slave to the Grind” is entertaining but to these ears not as great as the original – Sebastian Bach’s pipes are hard to replicate, while the acoustic interpretation of “Faded Pictures” showcases a bit of their softer side, although the talk-speak vocal angle isn’t necessarily ideal against the tender musical underpinning.

Those new to Darkness may dig Over and Out as a primer for looking deeper into their catalog. It sets up an interesting scenario for the sixth full-length, which will hopefully be hitting the market in 2021.