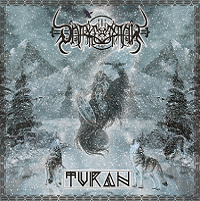 Tucked away in the true (or “troo”) netherworlds of European black metal, Germany’s Darkestrah have rather quietly made a career out of utilizing ancient folklore to benefit their conceptual cause. Previous efforts have found the battle tackling Genghis Khan, as so found on their Khagan EP, while The Great Silk Road detailed the Silk Roads trading routes. Therefore, for a band certifiably full of history buffs and smart gents, Darkestrah provide the well-read, bookworm-ish alternative to the fire and brimstone (or what have you) generally emanating from the black metal scene. The trend continues with their sixth album, Turan.

An album based on “a vast variety of mythological and ritualistic traditions,” Turan explores the rugged terrain of cinematic, symphonic black metal. At times, the band can even drop a folk element in (or two) as found on “One With the Grey Spirit,” while the smooth, flowing clean vocal guitar passages and female vocal accompaniment marry “Erlik-Khan” with melody and might. Here, this is perhaps where Darkestrah should look to make further inroads, as the worldly melodic tinge found across the number separates it from the rest of the album. As expected, these jaunts can be a little bit long in the tooth, with “Conversations of the Seer” and “The Hidden Light” ending up as songs where Darkestrah tries to bite off more than they can chew in the formatting department.

Turan, and Darkestrah as a whole, can probably waltz right up into the cross-crowd of Drudkh and Primordial, two bands steeped in folklore and remarkable storytelling. There’s not the same songwriting might as those two, but the Germans are able to state their case with a cascade of immense, sometimes dramatic, but certainly dutiful BM on Turan.