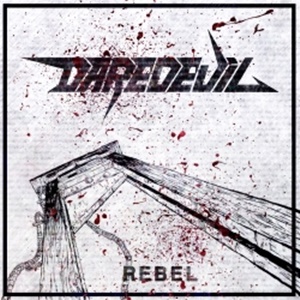 Analytics and click habits produce interesting results through social media these days. In the case of this scribe, it means many new metal band discoveries as links to self-released produce pops up in feeds. That’s how Daredevil comes into focus – a Russian upstart outfit that in less than a year’s time have released a three-song demo entitled Youth in Revolt and returned a month later with their latest EP Rebel. Continuing the three-track theme from the previous effort, this release contains two original songs and a closing Misfits cover of “Devilock” that wastes no time making its point in a heavy metal meets slightly thrash stance with pumping bass licks, razor sharp guitars, and a maniacal vocal performance.

The stunted rhythm guitars and rhythm section interplay that features some thick progressive bottom end action puts the mid-tempo opener “Killed in Action” front and center – Kirill Osipov on vocals employing a slight warble with his delivery that is clear and crazed all the same, the upbeat transition and lead break bringing back some early Metallica memories. The follow up “Social Vulture” has a very addictive guitar hook that grabs your headspace and doesn’t let go, the riffs fluctuating between crunchy thrash and traditional avenues, as if the New Wave of British Heavy Metal and the Bay Area movements during the 1980’s collided head on. “Devilock” is the speediest song of the three – emphasizing a punk side as the gang chorus could be one the Daredevil supporters shout along with glee as the band crank this out live. The obvious drum programming hopefully can be rectified down the line with a human drummer – as this is the type of music that needs that raw energy a solid kit man can deliver.

Probably still at a stage where they are solidifying their ideal lineup, Daredevil have potential to grow as Rebel has numerous qualities that can gain them a decent following. Headbang away and throw those fists high in the air.