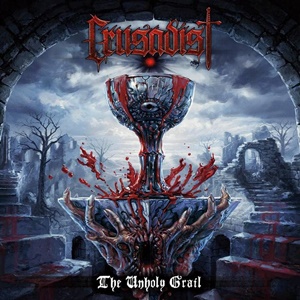 Appearing on this scribe’s radar screen due to guitarist Luke Sever of Opacia (previously covered on the site), he is also a member of Chicago-based metal act Crusadist. Forming in the summer of 2017, they recorded a three-song demo released last year and now the quintet is ready to unleash their first full-length for The Unholy Grail. The quintet also contains two former members of Against the Plagues, vocalist Shaun Albro and guitarist Aaron Nobles – and after numerous playbacks this record is a scorching example of melodic death/thrash delivered in a punishing and savage manner while taking into account the necessary melodic angles to keep the songs catchy and distinctive.

It’s evident right away that the guitar tandem of Sever and Nobles carry massive proficiency, hurling about technical/intricate waves of riffs and lead breaks all around their favored styles of thrash, death, and even progressive/blackened prisms. Influences from Death to Nevermore, At the Gates to Morbid Angel and even Scandinavian black artists appear in a lot of the heavy combinations and tremolo-fueled drive to make the title track and “The Hammer at Dawn” two bone-crushing standouts. Shaun as a vocalist has the gravelly growls and sinister screams necessary to corral the troops – Chuck Schuldiner one of the main comparisons when it comes to his raspy roars and evil menace beckoning “For Blood and Conquest” and the roller-coaster double-kick whirlwind that is “The Noble Savage” as winners for his vo-kill protocol. Many times throughout the record you’ll hear shorter bursts of classic circular traditional metal hooks, be it a specific guitar run or mid-tempo transition, which aids Crusadist in their mission to remain heavy/speedy but retain distinction in a style that can occasionally be too ‘brutal’ without variety. Check out the militant slamming transition into flange effects for “Only the Fearless Ride” where all elements come back together for death/thrash glory – a fitting conclusion to a nine-song, 46-minute record that elevates adrenaline and makes for an exhilarating metal experience each time out.

The varied thrash, death, and progressive influences allow Crusadist to balance out their heaviness and aggression while keeping things musically sharp and interesting. The Unholy Grail could allow the band to play for a wide array of audiences, and gain followers each time because this is seriously addictive, hair windmill, devil horns to the sky mandatory material.