Crusade of Bards – Tales of the Seven Seas (Rockshots Records) 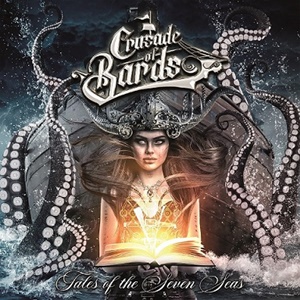 Pirate metal from a symphonic platform, Spain’s Crusade of Bards take the style to the hilt – right down to including a ship-oriented band logo. Forming in 2016, Tales of the Seven Seas is the follow-up to their 2019 Tales of Bards & Beasts debut album – an almost hour-long journey into folk, symphonic, and power/extreme horizons. Another victim of shutting down live gigs as the entertainment industry grinded to a halt during the past couple of years, fortunately creative momentum kept the band on track to develop more material as these musicians explore a multi-dimensional sound.

The six-piece use a triad vocal approach with male clean, female clean/operatic, and gruff textures – matching the versatile music and broad, dramatic strokes that include bagpipes, acoustic guitars, choirs, and orchestration outside of the metal platform. Fabio Lione makes a guest appearance for the uplifting “Lies & Ashes” – while other cuts like “The Northwest Passage” and “Dunkirk Privateers” combine aspects of Epica, Nightwish, and Alestorm in terms of the seesaw between aggression and unified good time atmosphere. Often dazzling displays of keyboard/guitar syncopation bring about late 90’s/early 2000’s power metal comparisons (think Stratovarius/Sonata Arctica), as well as folk/cultural type hooks that sprout up during “The Red Charade” which will make people want to dance the jig, incorporating angelic choirs against deep growls for more edge of anticipation action to absorb. The twin guitars and ivory keyboard/orchestration along with a steady rhythm section pounding push “Hasard” into one of the more exciting, shorter arrangements that captivates – while “Leap of Faith” contains a mix of quieter passages and bombastic, harmony-laden moments that epitomize being in the ship with the band. Many will have to be in the proper mindset to consume this material – interludes throughout breaking things up for sonic clarity/cleansing.

The exquisite and tasteful guitar playing from Adrian Carrero along with the main operatic duties of Eleanor Tenebre will be the major earworm aspects to keep Crusade of Bards rising up the ranks against the symphonic metal cavalcade. One to watch in the coming years.