The word “subterranean” appears in the bio for Craven Idol’s Toward Eschaton, and DR probably can’t conjure up a more worthy term for the band’s style of dark death metal. They’re a U.K.-based bunch, with names such as Vrath and Scourger holding it down, so clearly, this is not some trip through saccharine-town. Towards Eschaton steers itself toward 90’s death/thrash, with the necessary flip of the black metal switch, and is rolled up with diabolical atmosphere, making it cult. If you have a dude by the name of “Vrath” in the ranks, you better be as such…

Anyway, without a proper instant point of comparison (maybe some abyss-scraping with Aura Noir or Clandestine-era Entombed), Craven Idol is able to rely on their stock pile of wicked riffs and ominous melodic range. The choice moments come via the blast-a-rama that goes down during “Sworn Upon the Styx” or the frothy, thrashy “Golgotha Wounds,” which is where the black metal elements swoop on in. Even with these happenings, the album still is caustically cult (as mentioned above), even as one awaits some drop into the doom depths, the pillaging keeps on railing, like on the tremolo-picking infused “Codex of Seven Dooms” and the rancid “Left to Die.”

Towards Eschaton comes across so well because it doesn’t feel the need to re-tread the overtread. Meaning, there’s a noticeable vintage element here, but we’re not getting another rewrite of the Stockholm annals, or Norway circa 1993. Instead, Craven Idol has created something of substance and charm; the kind of record that marches forward while giving props to the masters. 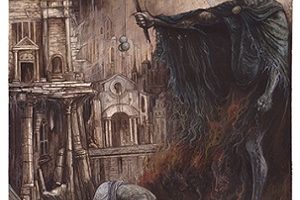