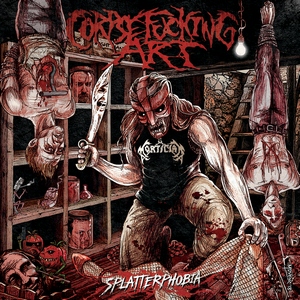 Never a band to take themselves too seriously (something extreme music could use more of), Corpsefucking Art deliver just the type of blood-soaked brutality that you would expect with their fifth full-length effort. Splatterphobia brings the ‘90s-era death metal in style and substance, and with it, a strong feeling of deja-vu.

While it’s one of those judging a book by its cover clichés, everything you need to know about Corpsefucking Art is lovingly displayed on its cover. A gory and brutal time is indeed at hand, and the band pulls no punches in its Cannibal Corpse (even covering “Staring Through the Eyes of the Dead”) and Suffocation inspired take on the genre. There’s never a lack for energy as the songs keep the intensity flowing, whether it comes in the form of punishing slams or blistering riffs and blastbeats. They have the sense to slow things down into groovy territory too (“Nightmare City”), providing the necessary variety, even if it comes in a ‘been there, done that’ feeling. Some humor is also at hand with the lyrical approach, and the old school vibe is even more enhanced by the use of some samples (including The Terminator and Robocop). In the end though, it’s hard to shake the nostalgia factor from the experience, with a deep feeling of familiarity to it eventually hindering some of its replay value.

There’s nothing wrong with Splatterphobia from a musical standpoint other than the unoriginality factor. Those who live and breathe death metal are going to be completely down with what Corpsefucking Art continue to do. It’s violent, explosive, and sprinkles in a bit of fun to the mix. But anyone seeking more of a fresh take on the genre aren’t going to find it here.