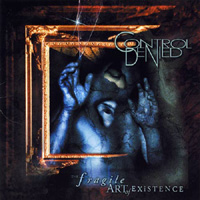 On paper, Control Denied seemed like the band that would lead metal into the 00’s. With Chuck Schuldiner at the helm, along with budding singer Tim Aymar (ex-Pyscho Scream, currently of Pharaoh) in tow, Control Denied looked to benefit greatly from the success of Death’s Sound of Perseverance. As fate would have it, the band’s 1999 debut The Fragile Art of Existence didn’t resonate as well as many figured it would have, Chuck got sick, and the rest is in the books.

With the band’s long-awaited second album When Man And Machine Collide still in legal limbo, it makes perfect sense to reissue The Fragile Art…, if only to help spur eventual Death reissues. The album itself is far from perfect, as Schuldiner’s elongated, highly progressive arrangements didn’t mesh well with Aymar as initially planned, leaving only “Consumed,” “What If…” and the masterful “Cut Down” as songs that could match up with Death.

The lack of memorable

material here diffuses the fact that had there been regular death metal-styled vocals ala The Sound of Perseverance, the results might have been different. Too often, it appears that Schuldiner hog-tied certain songs just for the sake of making Aymar’s vocals work. Since this is a reissue with demos, we do get to hear Schuldiner’s vocals on some of these songs, but it’s more in the half-sung/half-scream vein that was starting to shine through on Perseverance. Still, one would have liked to hear what was in store for the band if the clean vocal kinks were ironed out.

As mentioned, tacked on is a disc with demo versions, some dating back to 1996 prior to when Death reformed. There is little value to these other than for perspective, as there was a time when Schuldiner had no interest in reforming Death. Surprising that he didn’t use at least some of the riffs for Sound of Perseverance.

One cannot help but demonstrate some level of disappointment 11 years after The Fragile Art of Existence was released. Control Denied were clearly ahead of their time, but the residue from Death’s overwhelmingly successful comeback has forever overshadowed this album. Each and every Death album is mandatory, this is not. Hopefully When Man And Machine Collide will change that notion.