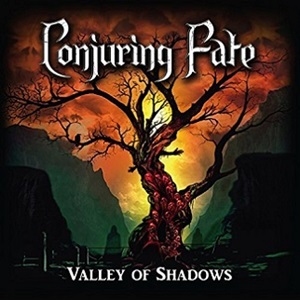 Originally formed in 2005 through guitarist Phil Horner and vocalist Tommy Daly, Conjuring Fate are an Irish quintet who’ve taken their time assembling the right players to execute their power/traditional metal vision. So much so that their first EP House on Haunted Hill didn’t hit the streets until the middle of 2014. Two years and change later, the follow up Valley of Shadows showcases a full set of tracks, including updated versions of the previous EP material – so expect an eleven-song outing that parallels many older influences from the 80’s in the UK and abroad.

The material has a lot of cultural hooks and arrangements that sit in a mid-tempo comfort zone – simplified, multi-part choruses work as rally cries against the driving power chords where the guitars and bass often mold together as one in unity. Tommy Daly as a vocalist conveys a decent melodic nature to his delivery – and yet there are times where he appears to be very dry or mechanical in terms of his projection, most evident in “Marching Dead” and “Trust No One”, the latter musically in line with current Helloween. Piped in sound effects and narrative elements occasionally enhance the proceedings, never deterring the proper musical action taking place. Twin guitar harmonies and thick, fluid bass propels opener “Our Darkest Days” into one of the better compositions for the groups, as Maiden glories come flooding back to life. Conjuring Fate also know how to throw down dynamics in spots, tastefully bringing the soft opening of “Chasing Shadows” into more of a fist-pumping power anthem, galvanizing the troops through the riff/tempo combination. Many of Conjuring Fate’s hooks and ideas seem to straddle the NWOBHM and early thrash movement – without necessarily being on the aggressive side of things.

Valley of Shadows gives the band a product to build upon – there’s just a little more versatility this scribe would appreciate in the drumming and vocal departments to push Conjuring Fate more into their own take of traditional/power metal.