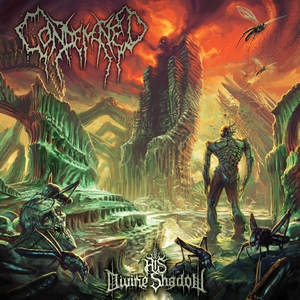 Yet another death metal act coming out of the hot bed of California (and hence tied to Unique Leader), Condemned are back for their third full-length album. This release comes six years after their second album, Realms of the Ungodly, and finds only guitarist Steve Crow returning after a significant number of personnel changes. Sadly, Condemned end up feeling more than a tad predictable with this offering.

Brutal death metal is sometimes hard to differentiate with if you play it straight, which is what exactly happens with His Divine Shadow. The first two names that come to mind are that of Suffocation and Disgorge, and one can fill in the blanks from there. The band does score some points for an album based upon an insect humanoid civilization, rather than going into the ‘gore for gore’s sake’ mentality but that’s about where the originality ends. The music, no matter how well executed, simply fails to stick out with any individuality. There’s blasts, thundering mid-tempo riffs, and guttural bellows, but it’s so indistinguishable from 90% of what’s out there that nothing sticks with the listener after it ends. To their merit, there’s a few bits of mood/atmosphere in some songs (“Nefarious Sanguine Decree” and the title track) but ultimately it’s not enough to topple 35-minutes of by-the-books death metal.

Certainly there’s a subsection that will find His Divine Shadow to have no fault purely due to its execution of the genre basics. But if you are looking for something that has more lasting power than a few blurring listens, it’s a safe bet you can avoid this one. Condemned need to further differentiate their sound if they want to make more of a name for themselves as they forge ahead.