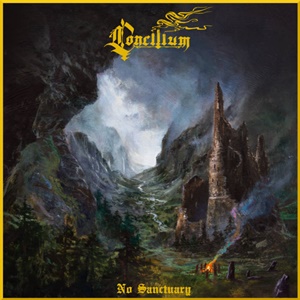 New England has a vibrant energy that allows for a diverse metal scene to thrive – especially on an organic, grassroots level. Doom/epic metal has appeal here as a result, legions of followers loving the slower tempos and classical/melodic hooks that appear on both vocal and musical fronts. Concilium hail from the Boston, MA area – a four-piece outfit that previously released a four-song demo in 2015 prior to recording and releasing this current EP, No Sanctuary. In many respects, a 31-minute outing would rank as an album-length effort, but given this is four-songs and an epic, doom heavy metal act, we’ll go with the band (and Metal-Archives) stance of EP status. This is an exquisite recording, breathtaking and awe-inspiring for those who want spine-tingling songwriting and masterful performances.

Three of the four songs on No Sanctuary embrace the ‘epic’ side of the group – the arrangements containing prolonged setups for atmosphere/emotional purpose, setting aural scenery through sparse bass, guitar, and drum movements. This is most evident in the first two minutes of “Halocline” – as vocalist Paris Thibault envelops the listener through her lower/middle register in measured comfort, just as Robert Lowe or Messiah Marcolin would during their prime in Solitude Aeturnus/Candlemass. Over the course of the ten-minute plus track, guitarists Greg Massi and Noah Stormbringer carve out layers of raw guitar riffs and supplementary majestic lead melodies – swaying to the slow tempo as if signaling time’s eventual demise while the poetic nature to the lyrics matches the proceedings. The shortest song “Ritual Attrition” is a three-minute instrumental with acoustic guitars, allowing the listener a bit of a reprieve as the dynamic latitude for the final salvo “Red Sun, Red Moon” keeps some Sabbath-esque riffing and calm/heavy contrast top of mind, probably the best Thibault-led melodies on the recording: evil, enthralling, and exactly what we want in epic heavy metal. Even the Adam Burke cover art captures the throwback, mystical nature of Concilium to heart – there is no worry about any sludge or stoner aspect to the band, as their intent is pure.

If people worry about this sub-genre struggling to gain any foothold, look no further than the efforts of Crypt Sermon, Smoulder, and Concilium to understand epic heavy/doom metal is doing just fine.