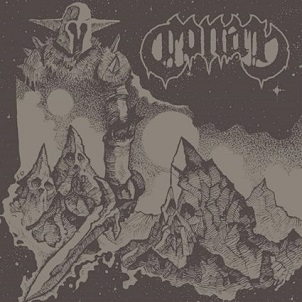 Much ado about Conan’s heaviness, which may topple them all, which is saying a lot. The U.K. doom troopers have effectively built a career out of lumbering, buzzing riffs, the type that is enough to shake ‘yer foundation, wreck the place, et al. They sacrifice technicality for unbridled simplicity, which may explain why they have resonated so well in spite of hand-wringing from journalists. While the band’s studio outings are often raw entities onto themselves, here is a collection culled from various rehearsal room recordings. Man is Myth – Early Demos shows just how dastardly heavy and crude Conan really is.

Picturing how this went, images of the band huddled up around a boombox, cranking these tunes out, comes to mind, especially on the 2006 and 2009 demos, which, as you would expect, are just beyond raw, even to the point where you wonder if vocalist Jon Davis is making up the lyrics as he goes along. By the time the demos for “Gravity Charm,” “Forehammer” and “Doomed Iron Boss” start making the rounds, Conan’s approach was solidified, in particular, Davis’s guitar tone, which is fundamentally devoid of dynamics, but is exactly what you’d expect it to be: heavier than time.

The reluctance to hold off on releasing rehearsal room recordings isn’t there with Conan. Considering the band’s all-natural stance and ability to repeatedly bash listeners over the head, it makes sense. Conan doesn’t do very many things well, but in the rehearsal room (and in the proper studio), they continue to stake their claim as one of metal’s most intimidating sonic forces.