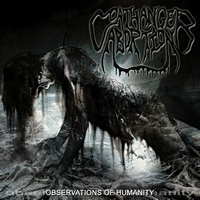 Another band that it doesn’t take a doctoral degree to determine what type of music that they play without hearing it, Coathanger Abortion sounds about the way that you would expect to it to sound. Thus, the band’s second album (and first in 6 years), Observations of Humanity, leaves little to the imagination and has the subtle nature of a bulldozer.

If for some strange reason you can’t make a wager on what Observations of Humanity serves up to you (nor the band’s label), let’s save you the trouble and call this one brutal death metal. Not the type that is going to go balls to the wall extreme in terms of heaviness, but rather a slower and more deliberate mid-tempo chugging that is designed for maximum heaviness (some clear nods to Suffocation here). The feel is rather ‘90s death metal for certain, with super low gurgles that will probably register with Tomb of the Mutilated-era Chris Barnes.

All in all, it’s an effective one-two punch of ‘90s brutal death metal, but there’s one real gaping flaw – the runtime. Most death metal albums of this variety are lucky to break past the 30-35 minute mark. Observations of Humanity is a staggering 55 minutes. Far too long for this particular genre, there’s simply not enough variety to justify the album lasting this long. Cutting the length in half would easily give this one the oomph that it needs to entertain the listener.

There’s nothing wrong with Coathanger Abortion’s approach to brutal death metal. To be honest, there’s a number of things that the band does right (a number of headbangably delicious riffs for one), but all of those feels go away as the album begins to long overstay its welcome. Might as well call this one a double-album!