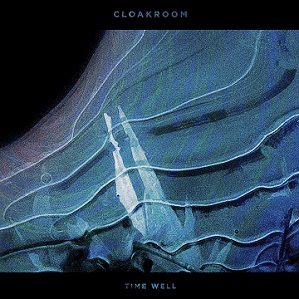 Here comes shoegaze and grunge running head-on, with Cloakroom, the product of three factory workers from Indiana (their words, not ours) brandishing the “We love the ’90s” sword. The fact they’re on Relapse is somewhat null at this point considering the label’s ever-increasing reach into new sonic territories, this, after years of pulling largely from death metal and grind. That being said, Cloakroom could be considered the close cousins to Nothing, another shoegaze outfit on Relapse. Surely Cloakroom wouldn’t balk at such a comparison, not after how their quite gratifying sophomore foray Time Well unfolds.

The lack of urgency here is purposeful; don’t forget that. The guitar strokes can get heavy, like in a grunge sense (Seattle being the focal point), while those pretty, almost dainty choral guitar chords paint the full picture, in particular on “Big World,” where a full jangle then guitar pedal overdrive envelope the song. Vocalist Doyle Martin is mostly succinct and reserved, never willing to cause a fuss, but also understanding of his place in the music. Therefore, his drab, emotionless delivery on opener “Gone, But Not Entirely” as well as the moody “Seedless Star” drive home their desolate, downtrodden point.

You know, if we’re going to somehow align this with metal (which we should probably do since this is a metal site), you could almost plop Cloakroom into the same room with post-Wildhoney-era Tiamat and understand the whole thing. There’s no push in the tempo; it’s near-lazy man rock, but when those smart chord arrangements and use of space and dynamics take form, you’re prone to be sucked in. As deceptive as Time Well appears to be on the surface, it’s every bit as satisfying. It’s a bona fide sleeper of an album…that is almost a sleeper in itself.