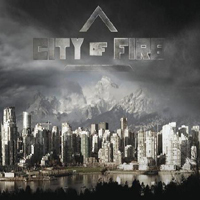 The timing of this is a bit questionable, as Fear Factory’s Mechanize is still making the rounds, virtually steamrolling everything in its path. Then again, a Fear Factory-related project (which City of Fire is) could generate some new-found interest because of how good Mechanize is. On the other hand, why run the risk of confusing the metal-buying public with a record that is not very metal? This is why Blistering is not in the record label business.

With FF vocalist Burton C. Bell and bassist Byron Stroud at the helm, City of Fire instantly gains credibility, even if this is another instance where Bell has wandered away from his industrial metal leanings (ref: Ascension of the Watchers). As it stands, CoF is a hard rock/metal hybrid, with decided commercial tendencies that coalesce with Bell’s versatile vocals. Opening number “Carve Your Name” would suggest otherwise, being the most metal number of the bunch, but from there, the album gradually shifts into rock-oriented, song-first avenues that don’t have the weight they should have.

Bell is the wild-card throughout this 11-song effort. Sometimes he’s bright (“Spirit Guide”), and other times he’s employing his mid-range (“Rising,” “Hollow Land”). Since we’re so accustomed to hearing the man’s vocals thrown up against jackhammer riffs, he becomes less effective when slotted with not-as aggressive music. This is why the Fear Factory songwriting formula works so well: When the time comes for a monster chorus, Bell is always there because it perfectly offsets what’s going down in the brutal, staccato verse sections. Here, it’s all in one together; staid, somewhat predictable, and not as engaging as one would initially think.

Fear Factory-related side projects have a spotty track record at best, and City of Fire adds to that notion. On paper, it seems like a great idea and there are some moments worth noting, but all pale in comparison to what FF has already done this year. Look at it this way: At least there’s nothing as abysmal here as FF’s cover of U2’s “I Will Follow” or better yet, Gary Neuman’s “Cars.”