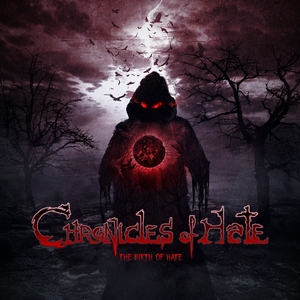 Italian death metal newcomers Chronicles of Hate attempt to merge the old and the new on their debut full-length. Though in this case, new is more ‘newer’ as much of the contrast comes from a take on death metal that incorporates groove and metalcore elements (many of which have been around for well over a decade now). Be that as it may, The Birth of Hate comes across as a bit too similar from beginning to end.

Given the injection of more metalcore-esque and groove metal influences into the death metal formula means that you are going to get more mid-tempo chugs and melodic sections to go along with the band’s Death influences. The musicianship is as solid as it should be, with a focus on more driving riffs at some points (such as “The Beast Within”) that provide some high energy thrills and couple with some Gothenburg influences. Catchy note flourishes and leads stick out (“Bet on Tragedy”) and the death metal aggression gets the point across. The one issue that tends to appear is the uniformity in the tracks. The grooves work, but as the album progresses the tempo seems to homogenize a good chunk of the songs, despite the melodies’ best efforts. The vocals don’t really help with this either with a perpetual rasp, and while this isn’t a new problem in the genre, it does add to the feeling here. One simply gets the feeling of knowing exactly what is coming around each corner and it puts a damper on the overall experience.

As a debut, The Birth of Hate does have some strong points in the melodies but the reliance on the same strong structures leaves it feeling somewhat underwhelming. Some out of the box approaches would help Chronicles of Hate out in the future – there’s potential, so let’s see what happens when they inevitably shed some influences next time around.