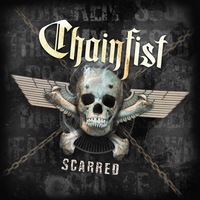 Now well past its glossy/potentially commercial period, Danish melodic metal has yet to find a band to work competently with Mercenary, who in spite of a massive singer change several years ago, remain the country’s most viable act in this field. Because Mercenary were so good for so long, it’s perhaps natural there would be someone waiting in the wings with at least a satellite approach, which would be Chainfist. Formed in 2007, the band doesn’t have roots in melodic death metal like Mercenary, but their adherence to modernized thrash and strong vocal undertakings make their second album Scarred worth a gander.

Being that vocals are given such a reduced role in metal these days, it’s a bit odd to hear them placed so high in the mix like Jackie Peterson’s are. Peterson may not possess a multi-octave range or have any noticeable European panache, but he’s definitely not too far off from Hetfield’s more melodic beltings, and probably as a more direct reference, Mnemic’s Guillaume Bideau. In tow are at least a handful of enjoyable vocal manifestations in such a vein, like on “Black Rebel Noise,” and “Seven Minutes of Pain,” which serves as the album’s heaviest – and catchiest cut. And to their credit, Scarred isn’t all polished, modernized thrash – there’s room for dynamics, as found on “Another Day in Hell,” and album closer “Mass Frustration.”

Sorely lacking in the visuals department (how many times have we seen a similar cover?), Chainfist might be a few steps away from being a fully-realized entity. However, there’s some validity on several fronts here, especially in the vocal department, where the album’s overall polish (thanks to a quality production job from Jacob Hansen) serves the band well.