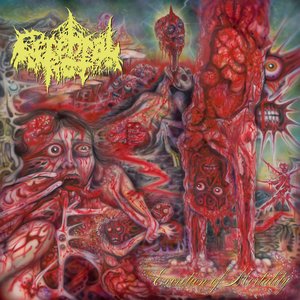 One strong point to Cerebral Rot’s debut, outside of the disgusting yet memorable death metal riffing, was that of using some vivid colors on their art. The same can be applied to their second album here, with a bright and gory look, enhanced by a very bright band logo in the corner. Striking stuff! But what matters most is the dark and abrasive stuff below the packaging, and Excretion of Mortality doesn’t disappoint there either.

Those hip to the band’s debut, Odious Descent into Decay, are sure to pick up the same festering vibes from this second helping. All of the band’s strong suits are here, and if anything, they’ve been refined into even greater ones. Notably, the absolutely filthy and sludgy sound that the band has. “Vile Yoke of Contagion” has just the right combination of oozing and ominous crawling alongside effective and chaotic speed runs to get you intrigued. What’s most impressive is how they can manage to pull off some lengthy tracks and keep things moving, such as the massive 11-minute closer “Crowning the Disgustulent (Breed of Repugnance),” which creates this intense and eerie vibe to it while bringing in hypnotic riffs and lurching melodies to perch atop the inhuman growls and gurgles and occasionally more intense moments. Despite not going outside the death metal toolkit, they provide a punishing yet strangely inviting atmosphere – for those who want it murky, at least.

While you can hear the cavernous and Incantation-y vibes creeping in at times, Cerebral Rot does their best work by avoiding any straight-up comparisons. Instead they dunk their death metal straight into an ooze that doses it with additional flavorings of doom and melody in such a way that keeps them more memorable and engaging than many of their current brethren. A solid step up from the debut, and one that all fans of rotten and putrid metal should give a listen to. 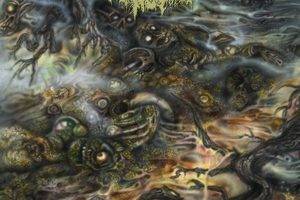