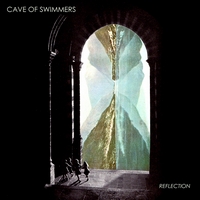 Repetition can be a band’s best friend, or its worst enemy. Certain styles of metal invite it (see: stoner sludge, in particular) making it the mother of necessity, while others, when involving a clean singer should be afforded the leeway to mix things up a little bit. Case in point, the opening song on Cave of Swimmers’ Reflection EP, “The Prince and the Power of the Air.” The same vocal line (“Hear me father, for eyes appear my prayer”) is repeated a dozen times within the song’s first two minutes, further hindered by vocalist GE Perez’s quasi-operatic howl. It’s severity in the annoying department shall not be understated. For shame…Cave of Swimmers have a unique thing going on. (Note: We could be wrong on said lyrics above. Apologies if that’s the case.)

The product of two Venezuelan dudes who met when they were in the fourth grade, Cave of Swimmers calls Miami home, although their geographical locale doesn’t take total precedent over their sound. But they’re all over the map, from the aforementioned classic rock wailing, to psychedelic and/or progressive metal, over to Latin fusion music. This combination does give a few of these jams a lift, like “The Skull” and the harmonious title track, which provides a much better view of what Cave of Swimmers should do based on its melodic, muscular nature, and, because it’s instrumental, which could be where the band’s real strength lies.

Only four songs here, plus a radio edit of the aforementioned “The Prince and the Power of the Air,” so there’s a lot to consume in a short frame of time. Beware of said “The Prince…” song, and Cave of Swimmers’ sometimes pretentious and unfocused nature, which while unique, is a hard sell.