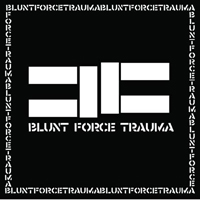 Wouldn’t it be nigh time for Max to just blend both of his bands? Like, “Cavalera Soul Conspiracy.” Would that work? The respective lineups of Cavalera Conspiracy and Soulfly have enough similarities at this point, but we digress…

The second go-round for Max and Igor Cavalera, Blunt Force Trauma has everything you’d expect from a record sporting two Sepultura cast-offs, and wisely culls from the Seps’ glory years, which of course, was from 1989 to 1993. Max seems to be no longer enamored with those dumb-ass bar chord riffs that he ran into the ground when Soulfly got started, so the buzz-saw riff action going down on opener “Warlord,” “Thrasher” and “Genghis Khan” is very much enticing. It almost makes one remember what a good rhythm guitarist Max is, as referenced by the right-hand gymnastics that went down on Beneath the Remains.

Like Soufly, Max can’t do a song without barking out its title in the chorus. At times, it’s a bit annoying, but the inherent strength of “Killing Inside” (hands-down the best jam here), and “I Speak Hate” give the frontman enough wiggle room to do his thing without getting in the way. Agnostic Front’s Roger Miret makes a guest appearance on “Lynch Mob,” lending his distinct throat to the proceedings, while a cover of Black Sabbath’s “Electric Funeral” is also of worth. We’d also be remiss if we didn’t mention lead guitarist Marc Rizzo, who remains an underrated entity, which is a total crime – the dude has a style all his own, peppering in his fancy flamenco leads that have plenty of melody and flare.

Blunt Force Trauma effectively negates any reason for a Sepultura reunion. No secret here – this is about as close to a Sepultura reunion as we may get and that’s fine – this is probably how they’d sound anyway. A far cry from Max and Igor’s prime, Blunt Force Trauma still packs a mighty punch, one that makes it easy to remember what an international force the Cavaleras once were and to some degree, still are.