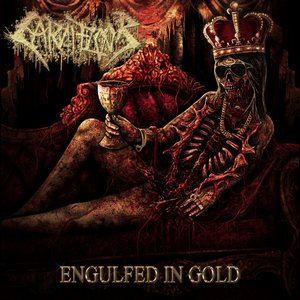 Stumbling upon this one on Bandcamp recently, Carnifloor is a one-man brutal slamming death metal act that may feature the prerequisite illegible band logo and gory cover, but don’t get the wrong initial impression. There’s something more beneath the surface of Engulfed in Gold that helps Carnifloor to stand out. While it may not be for everyone in the end, it’s still an impressive release that could turn some heads.

So what makes Carnifloor a bit different? In addition to ludicrous slamming breakdowns and massive bass drops that will shake your house, there’s elements of darker hip hop vibes that fit quite well within the band’s sound. “Gore Paradise” opens with some catchy and pulsating grooves, which alone give it a little more fun factor that a number of acts within the style, but as the song progresses, the massive bass drops give way to some atmospheric hip hop beats and raspy vocals. It still feels dark, and adds a new flavor to the song, only for a few brief moments. The way they are added into the ending of the track, coupled with a breakdown also augments the qualities of both. Other songs like “Entombed in the Hood” and “Hustlers Wasteland” effectively bring all of these elements together in a way that feels unique, and never forced. The other really noticeable piece to this album is the sound quality of it. Lots of brutal death metal tries to be as muddy as possible – Carnifloor has a very meaty, but still discernable sound. You can feel the bass drops and listen to the grooves and faster tempo stuff without it becoming a sloppy mess of heaviness. Due to this, the grooves stick and the speed runs are more playful and energetic.

Engulfed in Gold is one of the more enjoyable releases that this scribe has come across in brutal/slamming death territory in 2020. It manages to be ridiculously heavy, while avoiding the overly excessive stuff – there’s a rhyme and reason to the song structure, and even with the hip hop elements woven in, there’s a cohesive flow to each track. Consider that Carnifloor is handled by only one person, and it’s simply the icing on the cake.