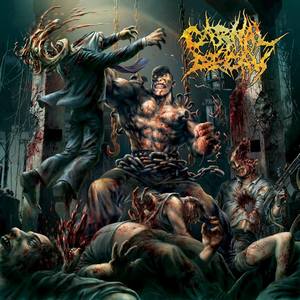 Dying Fetus anyone? As one of the larger perpetrators of the groovy death metal with a bit of a hardcore influence (Despised Icon comes into play here as well) most that venture down this path share some similarities with the act, who has influenced a number of these types of bands. One of the more surprising tidbits is that Carnal Decay hail from Switzerland, yet their groove-based tunes feel quite akin to something more American-born.

What you may not expect, given the opening description, is just how hard Carnal Decay can hit when they want to. The slam-friendly, mid-tempo riffs have some devastating power behind them, as tracks like “Freed from the Leash” will quickly exemplify. They also hit the higher tempos with the same reckless abandon, happy to leave the listener in a whirlwind of chaos if needed (“I Crush Your Dreams”). With the songs averaging the 3-4 minute mark, it’s also a case of getting straight to the point. You won’t find anything overly drawn out – it’s a matter of quick and vicious stabs to get the point across. The hardcore aspects come out in some gang-vocal type bursts and shouts (which contrast against the more brutal, guttural delivery elsewhere) to the slamming breakdown territory. While the tough-guy/bro lyrics may not be this scribe’s cup of tea (see “Not Worth a Bullet”), they do fit with the overall level of anger and aggression of the music itself.

A frantic and dizzying assault from start to finish, You Owe You Pay will suit the needs of those fixing for an exercise in brutality. It’s straight-forward and one of those albums you’ll seek out only when you are in the mood for pure adrenaline, but to that end, it’s a totally successful and succinct release.