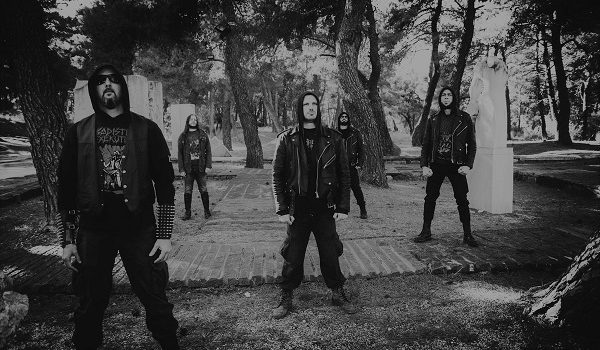 We will be past the half-year point by the time you’re reading this and surely you’ve made up your mind as to what has been hot in 2018, as have we. Since there are so many releases that are “hot” (saying “hot” because a heat wave is currently engulfing the northeastern U.S.), it provides a conundrum: Some releases are going to be lost in the shuffle. It’s yet another release why we do a monthly short review column, Rapid Fires. Up for debate this month is Carnal Decay, Carriage, Carrion, Cayne, Embrace of Thorns (pictured), Demise and Domination, Epica, Fantasy Opus, Panegyrist, Satan My Master, Shitty Person, Stormwitch, Weathered Statues, Wonderworld, and Wound Collector. 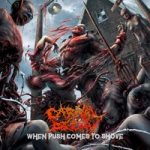 Carnal Decay – When Push Comes to Shove (Rising Nemesis Records)
Coming hot off of last year’s You Owe You Pay, When Push Comes to Shove is a short, 3-song EP that packs more punch than one might imagine. For starters, perhaps due to the length, it feels more urgent than its full-length predecessor. If one has checked out Carnal Decay in the past, then you basically know what you are going to get with this. But there’s some surprising strength to the material – it feels a bit more fleshed out and well-written. The slams/grooves hit hard with some excellent placement, and the speedier moments have plenty of momentum behind them. It may be a worn formula, but Carnal Decay prove that they are indeed stepping up their game. – Kyle McGinn (Carnal Decay on Facebook) 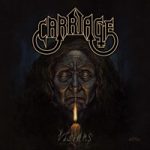 Carriage – Visions (Stormspell Records)
Forming from various local acts, Carriage hail from Virginia and bring back the days of soaring falsettos and horror-filled themes in a power/traditional metal mold for this full-length Visions. Between Robbie Rainey hitting King Diamond meets John Cyriis highs right out of the gate for “Primal Ritual” as well as the slower melodic twin guitar harmonies during the instrumental break out of Michael Martin and River Ashberry, it’s easy to see this quintet love Maiden, Mercyful Fate, Grim Reaper, and Savatage along with Metal Church. A mixture of pumping anthems (“In the Night”), brooding, moody efforts (“The Owl”), and the occasional driving epic like “Alucarda” ensure maximum playback for versatility’s sake. You could close your eyes and think it was 1985 all over again with this album – Carriage are another of the new breed that keep the older aesthetics, tones, and qualities front and center here. – Matt Coe (Carriage on Facebook) 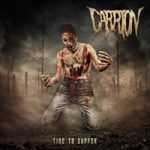 Carrion – Time to Suffer (Mighty Music)
A Belgian death act thankfully changing names in 2008 to replace Reroute to Remain (avoiding obvious In Flames comparisons), Carrion sit in that groovy death metal category for this second album Time to Suffer. Expect ten tracks that run the gamut from lurching, American-style death crawls (Obituary, Jungle Rot) into sections that blast and race with the best of them (Suffocation and their proteges). Between Sven Van Severen’s caustic growl/scream/pig squeal variations and the equally vicious riff/tempo action, most will find favor with the severed limb activity throughout “Supreme” and “Torment”, while it’s hard to argue about the impact of “Gingergrind”. This is material primed for attack, live carnage awaits. – Matt Coe (Carrion on Facebook) 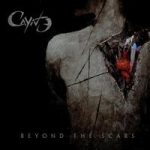 Cayne – Beyond the Scars (Graviton Music Services)
With the tag-line of being formed by two founding guitarists of Lacuna Coil (Raffaele Zagaria and Claudio Leo), Cayne return with their first release in five years with Beyond the Scars. The music itself does a bit of jumping around without seeming scatterbrained. Moments of heavy metal collide with gothic, hard rock, and progressive tones and a modern flair. It’s quite digestible overall, with the electronic/synth elements not becoming too overwhelming in the mix, and having some very strong vocals from start to finish. Those looking for melodies will find plenty of them to dig into and enjoy. – Kyle McGinn (Cayne official website) 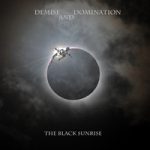 Demise and Domination – The Black Sunrise (Machineman Records)
The mere mention of Nate Exx Gradowski should be enough to give you a clear visual of what to expect here for the most part. Gradowski has a number of different projects with slightly different takes on the same type of sound. That being Soul of a New Machine-era Fear Factory of course. The fourth album in a concept series (and first in 4 years after cranking out 3 albums in 2014), The Black Sunrise deals with an evil government in a fictitious world, it’s got the mechnaical riffing down pat, as well as the aggressive tone needed to convey the material, though it does also dip both toes into some atmosphere and melodies. The synths give it a futuristic feel as well, rounding out yet another solid package of Gradowski’s material. – Kyle McGinn (Demise and Domination on Facebook) 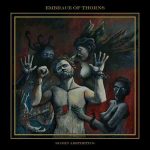 Embrace of Thorns – Scorn Aesthetics (Iron Bonehead)
Not really in the conversation when it comes to Greece metal, Embrace of Thorns have been kicking around since 1999. Thus, they’re largely a European underground metal quantity, but shouldn’t diminish the band’s firebrand black/thrash/death attack on Scorn Aesthetics. Sure, it crawls through the dim, dark caves like any normal BM album would, but Embrace of Thorns often twist things in such a manner that they’re looking back to extreme metal’s early days (catch of a whiff of their Sarcofago influence) as well as the current whirls of black metal. Both angles work. – David E. Gehlke (Embrace of Thorns Bandcamp) 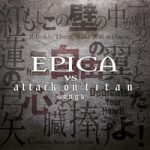 Epica – Epica vs. Attack on Titan (Nuclear Blast)
Originally released in Japan last year, Epica vs. Attack on Titan is 4 songs from well, the Attack on Titan anime that Epica covered. Not being entirely familiar with the source material, any new Epica is usually a good thing. Regardless of the source, these clearly sound like Epica songs, with heavy and bombastic elements driving the music forward. The band’s knack for crafting urgent and catchy melodies is set on display, and with four tracks, there’s never a sense of overindulgence. Even when the instrumental tracks are included at the end. A no-brainer for those who like the band (and assumingly for fans of the film). – Kyle McGinn (Epica official website) 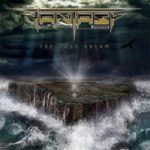 Fantasy Opus – The Last Dream (Pure Steel Publishing)
Nine years between albums for this Portugal power/progressive metal act, but hopefully The Last Dream is worth the wait. Fantasy Opus live for a neoclassical slant, longer instrumental passages, and a dramatic vocal presentation on this eleven-track album spread out over 70 minutes. An uplifting power chorus sets “Ritual of Blood” as a proper opener, Leonel Silva delivering the words from a Peavy meets positive epic perspective. Driving rhythms, flashy intricacies, and amazing musical chemistry will have most thinking of Symphony X, Dream Theater, and Angra, just put through a bit of a Teutonic power twist especially when it comes to specific hooks and choruses (check out “Heaven Denied” or “Realm of the Mighty Gods”). Sure to appease most fans of the genre. – Matt Coe (Fantasy Opus on Facebook)

Panegyrist – Hierurgy (I, Voidhanger)
Twisting out there by its lonesome (at least in America) in its avant-garde black metal glory, Panegyrist is thoroughly distinctive, perhaps sometimes to their own detriment. The manner in which their songs unfold across Hierugy is diversionary and difficult at times, primarily due to the flurry of vocals, winding guitar work and off-kilter structures. Then again, it’s a highly involved listening, coming from a band who is so far along in their development that even they, at times, aren’t quite sure which way to go. Guess that’s part of the plan after all. – David E. Gehlke (Panegyrist Facebook) 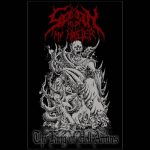 Satan My Master – The King of Hell Arrives EP (Hellprod Records)
Limited to only 100 copies, The King of Hell Arrives is quite the statement from this Portuguese duo, whereupon the blitzkrieg worlds of death and black metal converge, which, seems to be the norm in this column. Nevertheless, the outsized blasting and atmosphere conjured up on “Tormenting the Nazarene Swine,” “Servant of Hell” and “Son of a Whore” largely say it all — Satan My Master, for lack of a better term, don’t pussyfoot around anything. – David E. Gehlke (Satan My Master Facebook) 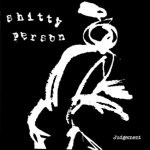 Shitty Person – Judgement (Svart)
Really, doesn’t get more memorable than “Shitty Person,” a name that immediately jumps off the page and/or screen. If you are going to call a rather sullen, tongue-in-cheek “heroin rock” band as such, the tunes need to be there, which they mostly are, starting with the impressive and moody “Butthole,” a minimalistic venture gone right. “Take Your Clothes Off,” with its dark garage rock jangle is just as good. Judgement doesn’t amount to much after those two songs, but, you won’t forget Shitty Person. What a name. – David E. Gehlke (Shitty Person Facebook) 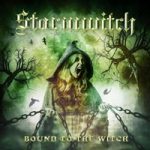 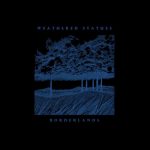 Weathered Statues – Borderlands (Svart)
Post-rock, while not totally en vogue at the moment, seems to have more potential than post-metal, which is going through a rather obvious thin period. Bands like Denver’s Weathered Statues continue to pop up, bringing forth those driving bass lines, delay-soaked guitars and female-poppy vocals. On their Borderlands debut, Weathered Statues often achieve that danceable, pulsating feel, even though the vocals of Jennie Mather may fall into acquired taste territory. Nevertheless, there’s some charm here, something that shouldn’t come as much of a surprise. – David E. Gehlke (Weathered Statues Facebook) 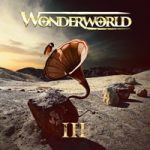 Wonderworld – III (Sliptrick Records)
Normally melodic hard rock with blues-based/progressive nuances would not meet typical Dead Rhetoric critical criteria, but this Italian/Norwegian trio contains Labyrinth vocalist Roberto Tiranti on bass/vocals – so III is worth a peek. And a mighty effort indeed it is for those who love classic Deep Purple, Led Zeppelin, Rush, and others in that 70’s brigade taken into AOR textures. Roberto uses more of his lower and middle registers to dynamic magnificence, channeling everything from Lou Gramm and Robert Plant to Tommy Shaw and Glenn Hughes on the propulsive swinger “Stormy Night” (featuring Hammond action from Alessandro Del Vecchio), while striding into almost Rainbow territory through giant bluesy riffs and molten drum maneuvers for “Brand New Man”. Roberto even pulls off some Billy Sheehan-esque bass tapping action for “Big Word” that galvanizes the main hook. You think this genre is for the old guard – Wonderworld will prove through this stunning, catchy album that there’s vitality in the new breed as well. – Matt Coe (Wonderworld official website) 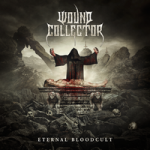 Wound Collector – Eternal Bloodcult (Profane Records)
Take a crushing death metal formula and add some jazzy saxophone to it, and you’ve got a picture of what Wound Collector is offering. The saxophone really can’t be undersold on this one – it’s clear that the band wanted this represented well and really took some effort in incorporating it at the right moments to allow it to shine. Some technical intricacy and real bludgeoning riffs at times help make sure no one forgets they are listening to a death metal beast. The only regrettable inclusion are the somewhat underwhelming and over-the-top growls. If they get a handle on them, they are primed to explode in the scene. – Kyle McGinn (Wound Collector on Facebook)