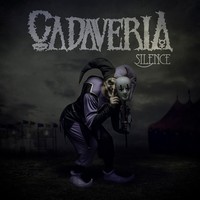 Strange, yet straightforward in their execution, Italy’s Cadaveria have built a stable, un-flashy career since their 2001 formation. The concoction of two former Opera IX members, vocalist Cadaveria and drummer Flegias, Cadaveria play a wrenched, somewhat Gothic, occasionally melodic, and partly avant-garde blend of female-fronted metal. Since there is no proper sub-genre fallback for us lazy journalists, the band has been able to elude proper description, and alas, greater acceptance, something that doesn’t appear to change with their fifth album, Silence.

Vocalist Cadaveria (real name: Raffaella Rivarolo) jostles between witch-y screams and a clean tone that while seemingly lacking the air and fluidity of her more pristine contemporaries, has character. It’s an identifiable trait of the band, and a good one considering how difficult it is for any female vocalist to carve out a sense of identity. Nevertheless, she’s at most convincing during the back-and-forth found on “Free Spirit” and grueling “Death Again,” where again, her clean vocals take center stage against the backdrop of droning, dis-harmonious riffs. (One could cite Cradle of Filth as a practical reference for some of these jams, actually.)

Beyond that, there’s some ample Goth action here, especially on “Almost Ghastly” where soft piano touches provide the guts for the album’s best song, which per the norm with Cadaveria (the band), has a manic duplicity that is either thoroughly enjoyable or frustrating depending on one’s angle. The punchy closing romp of “Strangled Idols” (nice title) has the album’s most obvious thrash edge, a noticeable cut away from the dark and out-of-the-box flourishes the band is so apt to employ.

A really difficult band to segment who makes even more difficult albums to latch onto, Cadaveria’s seemingly endless lunge to individuality is a blessing and a curse. Silence, while loaded with good ideas, is one of those purposely elusive albums that even the more open-minded may have trouble trying to land. Perhaps that’s the crux of the matter.