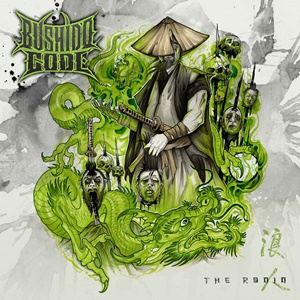 Hailing from Pennsylvania and arising in 2017 from a healthy hardcore scene, Bushido Code evolved into a crossover thrash sound that bridges elements of both along with death metal. Releasing two EP’s in 2018 and 2019 entitled The Dying Virtues Volume One and Two, they are now ready to release their first full-length for The Ronin. Telling the story of a Ronin Samuari time traveler Da Shi on the lookout for a warrior worthy of helping achieve the most honorable sacrifice, that of death – it’s a hard-hitting effort that most who want crisp riffing, fierce vocals, and shifting tempos that are in a thrash base but also incorporating the potent hardcore and death elements devour.

Certain segments of specific tracks possess that angst and grit of classic hardcore – when bands like Agnostic Front and All Out War ruled the land, only to shift into gallop-oriented headbangers with straight ahead thrash transitions and double kick mechanics. It’s very easy to see some circle pits and stage diving antics for “Aftermath” as one of the early album highlights, punctuated with solid lead break action that adds a melodic touch to the arrangement. At other times the quintet rolls out some thick power parts, the type that 80’s Metallica and Testament made a living off of – where “Stench of Cowards Rot” and “Loyalty” feature the ideal tom rolls, tempo shifts, and dual rhythm riff assault that patrons of the movement expect. At nine songs and under thirty-minutes, Bushido Code subscribe and execute a ‘get in/get out’ philosophy when it comes to these tracks – probably aligning with the hardcore philosophy they grew up around. The instrumental “Prelude to Battle” offers a quiet reprieve from the album, clean guitar and thoughtful bass parts almost giving off a bit of a Tool-vibe. Vocalist Mike Ledet has that crossover appeal too – enough ferocity to appease the metalheads but also rhythmic and sharp when necessary for hardcore appreciators – all the way through to the pummeling mid-tempo closer “Benevolence”.

The Ronin allows listeners to absorb a solid set of material that has potential for Bushido Code to play on a variety of heavy bills and festivals – hopefully gaining an even stronger fanbase as they have the goods to go places.