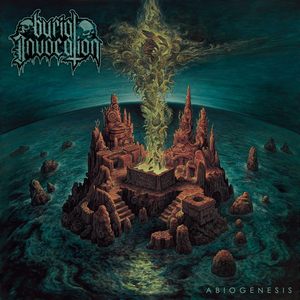 A name like Burial Invocation probably means you can assume there’s going to be some doomy stuff going on. The Turkey-based act certainly qualifies for this as you begin to look further into the album, with 5 tracks that clock in at 42-minutes in length. Given the killer Dan Seagrave artwork, it’s also safe to assume that this doomy death metal is going to aim for an older or timeless feel.

Abiogenesis sits as the first Burial Invocation full-length, following up an EP and a split back at the beginning of this decade. But with a sound rooted in the old and macabre, the time span between doesn’t make much of a goings-on. There’s a clear ‘90s feel (particularly Finnish in some regards) that guides the band through these death metal journeys – journeys in the sense that outside the acoustic outro “Tenebrous Horizons,” the songs range between 8 and 12-minutes in length. This means the band needs to be on the top of their game when it comes to keeping things interesting (and forward-moving). This doesn’t seem to be much of an obstacle, as they quickly switch things up from crawling, cavernous grooves to more blastbeat-riddled speed runs with no difficulty. Opener “Revival” seems to hit just about every tempo one looks for with death metal, and the writing when it comes individual riffing seems to be spot on as well. They build up some tension, ramp things up, and then go into a bit of a cooldown in the doomy waters. It’s an enjoyable set-up, even if it’s one that has seen its fair share of use over the years.

Abiogenesis checks off all the necessary boxes for success in the doom/death spectrum. Plenty of dynamics, solid musicianship, and a slightly old school feel (without feeling redundant) make it a solid outing for those who enjoy this sort of thing.