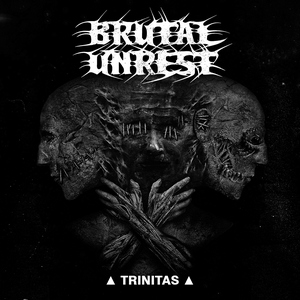 Death metal can be a fickle beast. There’s a bounty of bands trying to play it, but there’s only so many that come across as compelling – particularly with so many attempting to play within the same sound that has lasted for decades at this point. Sometimes it’s merely a matter of how many topics you can put on to the ole meat & potatoes. Brutal Unrest’s third full-length, Trinitas, may not open your ears with originality, but they seem to know how to make a statement.

A German act with some experienced members in the mix (including current/past members of Suidakra, Prostitute Disfigurement, Human Waste, and more), they squarely take on the classic feel of brutal death metal, which includes bands such as Deicide, Suffocation, and Aeon. As cited, it’s not quite innovative but in this case it doesn’t need to be – Brutal Unrest has a strong grasp on what makes the genre tick and their enthusiasm for it is notable. It’s more about the riffs and the intensity, and they both work like a charm here. Right out of the gates, the one-two punch of “Systematic Torture” and “Pathogenic Nation” give off enough charge that any genre fan will be pulled into it, with a solid combination of blasting (complete with Suffocation-esque snare), thick and energetic grooves, and melodic leads. The only misstep is that of the heavily sound-clipped instrumental “Cotardious,” which drains some of the momentum of the previous tracks; thankfully it doesn’t take “Enslaved By Hate” too much time to get things moving in the right direction again.

For the most part, Trinitas is a top-shelf execution of brutal death metal that can draw lineage back almost 30 years at this point. Those with an appreciation for the genre will most definitely get some mileage out of it due to the potent grooves and visceral intensity. It’s a meat & potatoes affair, but Brutal Unrest know how to spice up their cooking.