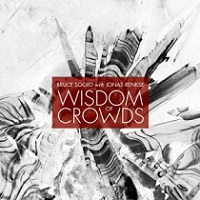 Katatonia’s Jonas Renkse has proven throughout his 20+ year career that he’s come to master the profound art of saying just the right thing at the right time. For some (including this scribe), he’s the narrator of life, and ultimately, the voice of reason amongst the unreasonable. He’s a hot commodity, as evidenced by his standout guest work with Ayreon, Long Distance Calling, and Swallow the Sun, and not counting his past and present side bands October Tide and Bloodbath, his collaboration with Pineapple Thief mainman Bruce Soord marks the singer’s first full album vocal excursion since OT’s 1995 Rain Without End.

As a bit of coincidence, the music heard on the pair’s Wisdom of Crowds debut follows largely, the same stripped-down, use-the-space mode Katatonia has employed on their last two studio efforts. It’s not metal, far from it, yet the compositional abilities of Soord show the Brit is capable of using heavy guitars when he has to without going the metal route. The beach-like vibe (yeah, a BEACH) of the title track suggests how far the creative reach is here, while the use of samples and loops are plaintive and driving on “Radio Star” and “Pretend.”

By default, Renkse sounds melancholic. His voice has rounded down to a less rangy tone than those glorious Last Fair Deal Gone Down days, so it’s no wonder the subtle “Frozen North” is such a charmer. “The Light” emerges as the lone track here that could qualify for a Katatonia number. It’s the vein of “Unfurl” and “Leech,” but with the added sounds of Soord’s loop work, quickly veers off from Kata-territory.

Backers of modern day Katatonia will have zero problem lapping up Wisdom of Crowds. Anyone beyond say, Viva Emptiness might find the album to be too restrained, with too much reliance on minimalism. However, (and we’re showing our bias here) anything that has Renkse’s vocals on it is reason enough for exploration…the Swede is simply too convincing of a vocalist to ignore.