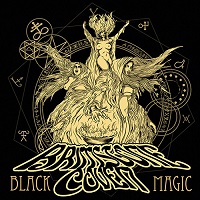 “Backwoods Sabbath,” perhaps? West Virginia’s Brimstone Coven make little attempts at covering up who their primary influence is, which would be, obviously Black Sabbath. Throw in Pentagram, Blue Cheer, and more, and what you have is a pretty common blend of (flannel) sleeve-wearin, none of which really move the needle circa 2016. Therefore, it boils down to one thing, which is even more obvious than Brimstone Coven’s love of Black Sabbath: The songs. And sure, the whole sludge/doom probably could use a good re-tinkering or rethinking (“re-think-er-ing”), but the principle of the matter is that the barbed, backroom charm of Black Magic supersedes any sort of predisposed notions of Brimstone Coven’s chosen style of music.

Black Magic is the band’s sophomore effort, a raw, rangy long-player (and we mean that in the most literal sense) that is more heavy rock than it is heavy metal, more hippie than hipster. The coo and cow of vocalist “Big John” Williams has a lot to do with that. He’s personable, even snappy on “Black Unicorn,” where his blues-soaked voice eats up the analog tape without a problem. He’s even better on “As Well Fall,” the album’s dedicated somber tune, where he drowns and muddles his vocals in a restless sea of reflection and thought. (Lest we forget that Williams has a stellar set of lungs, just reference “Beyond the Astral.”)

But it’s the charging, harmonized sprawl of “Upon the Mountain,” the FM radio-ready “Forsaken,” and the album’s most progressive jam, “The Eldest Tree” that proves Brimstone Coven have the introspective mettle to hang with the in-and-out retro rock scene. And let’s call a spade a spade here: That’s what Black Magic is – a retro rock album, but a damn good one at that. 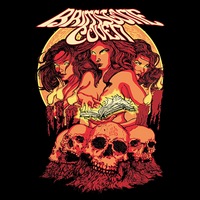