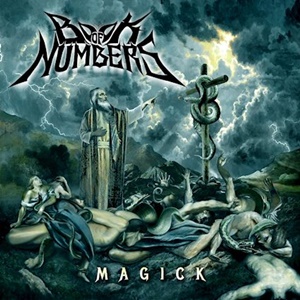 From the desert terrain of Phoenix, Arizona we have Book of Numbers – originating in 2019 as a Black Sabbath tribute band, evolving into an original outfit for this debut album Magick. Amongst the ranks is bassist Dennis Hayes, who has worked with Iced Earth, Seven Witches, and Beyond Fear – along with vocalist Kevin Schuhmacher, guitarist Brent Barker, and session drummer Gary Bruzzese. Based on their seasoning and experience at the craft of heavy metal, it’s very apparent that this band embraces a classic metal approach, incorporating a mix of doom and power influences from the 70’s/80’s eras.

Taking a stance of blending a broad scope of metal, opera, and movie soundtrack textures to give these songs depth, drama, and chilling atmosphere, specific songs recall artists like Black Sabbath (both Ozzy and Dio periods), Rainbow, Dio during his 1980’s heydays, as well as a bit of Judas Priest. Brent has a knack for driving home that key, low-tuned riff that conveys evil in a metal to the bone context – check out his work within “The Jester’s Crown” which would make Criss Oliva and Tony Iommi proud between the main hooks and emotive, longer than normal lead break that tells its own vivid story. The tender verses for “White Turns Black to Grey ” give Kevin a wide berth of channeling his best Dio-esque charm, the acoustic guitars and keyboard never overshadowing his melodies in this ballad highlight. Open snare/cymbal crashes revel in the classic power/doom metal charm that is “Yesterday’s Nightmare” – an easy audience swaying number featuring that connective headbanging guitar sequence, the perfect mountaintop voice gliding in, plus groove support to drive the arrangement home. Outside of the seven original songs, Book of Numbers tackles “Children of the Sea” from Heaven and Hell – a fitting tribute and aligning well with the principal power of doom that conveys grace, attitude, poise, and strength to stand the test of time forty plus years beyond its original airing.

Book of Numbers sticks to a specific era of heavy metal (circa 1975-1983) and executes full tilt on their doom and power influences with Magick. A solid debut and hopefully one to build upon in future releases.