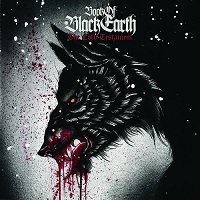 There’s a slew of bands

that would be better served to make plays like the one Book of Black Earth make on their third album, The Cold Testament. And by “plays” we mean not trying to trick anyone. Without any gimmicks or pounding keyboards (a trait that was all over their last album, 2008’s Horoskopus), the Seattle-based quartet lay down a rather perilous blackened thrash gauntlet on this 8-song effort.

With no apparent desire to slow things down, Book

of Black Earth keeps the tempo moving, as heard on opener “Weight of the World.” Singer/guitarist TJ Cowgill finds that delicate niche between full-on black metal rasps and death metal gurgling, proving to be the most convincing entity in the band’s arsenal. When most singers of this ilk are given the chance to open their mouths, it’s usually a matter of looking past the fact they never shut up, but Cowgill manages to pick his spots wisely and in the process, sound utterly demonic when doing so.

Some cool hybrids go down here, specifically on the blackened punk spell of “Cross Contamination” and “Research and Destroy,” the post-metal crawl of “Antarctica” and all-guns blazing front of “Termination,” which also manages to cue in a nice voiceover. The band manages to cross things up with closer “I See Demons,” which sees a quite sizable array of haunting melodies and creative riff tactics, thus ending the album on the right (and dark) note after virtually trying to steamroll everyone in the process.

The Cold Testament is pretty ripping and feral, which makes sense considering the album cover features a ferocious wolf. Wolves are pretty scary

and intimidating and when Book of Black Earth squares their shoulders, they’re just as threatening, minus the whole blood and rabies part.