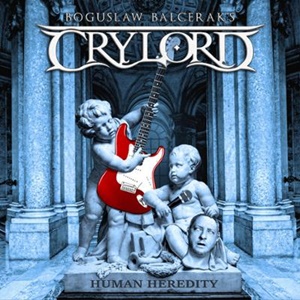 Displaying a prowess for neoclassical power metal from Poland, multi-instrumentalist Boguslaw Balcerak has been developing his work under the Crylord banner since 2009. Releasing two albums to date, Human Heredity as the third full-length comes eight years after the last record Gates of Valhalla. Always featuring Jeremiasz Baum on drums and a bevy of stellar vocalists, its interesting and entertaining to hear seasoned musicians develop their craft as the years roll on by – and that’s what listeners can expect through these eleven tracks.

Those familiar with the genre probably know what to expect – a mixture of mid-tempo to slightly faster power offerings where the singing shines during the verses and choruses, the instrumental moments allowing Boguslaw to display his axe and keyboard skills to the hilt, while Jeremiasz lays down a solid backbeat and showcases adept meter changes / transitional fill highlights when called for. The diversity of singers opens up horizons for compelling contrasts – Göran Edman for instance appearing on a more AOR/arena-rock type number such as “Set My Heart on Fire”, while the bluesy, groove-laden “Falling For You” featuring Ryan Beck showcases more potent high register melodies while Boguslaw treasures the pacing of his lead break, going from softer notes to ripping arpeggio runs enhancing the atmosphere for the main musical components. The Judas Priest-like double kick action and mystical guitar chords make “Wolf at the Gates” a second half must-hear, especially with all shades of Tim ‘Ripper’ Owens and his leather lung register making an appearance, circular guitar melodies giving chase to more Yngwie-like fluidity and equally intoxicating keyboard mesmerizing fun. Wasting no time being progressive and intricate for opener “It’s Just a Wind” through a stunning keyboard/guitar syncopation start (the keyboards triumphant in a Styx/Kansas-oriented way), the follow-up “Thunderbolt” featuring Masterplan/ Herman Frank vocalist Rick Altzi has a lot of similar qualities that may recall his At Vance years, very melodic and old school driven as far as the main songwriting elements.

Keeping the songs in a tight 3:39 – 5:01 window to prevent any aural burnout or informational overload, Human Heredity contains all the expected tricks of the trade for those who love Impelliterri, Yngwie Malmsteen, and others in that neoclassical power metal scene – just smoothed over to keep the reigns as songs and not pure egomaniacal exercises in dexterity.