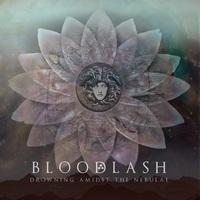 Admittedly, upon viewing the title, cover art, and song titles, this one was already pegged as either a tech death or deathcore release (you know, because there’s “blood” in the title after all, and they used the word “nebulae”). In a bit of surprise though, Drowning Amidst the Nebulae is a far more diverse beast. And that’s not a bad thing.

One of Bloodlash’s better qualities is the fact that it’s incredibly hard to give them the “usual” tags. The band nails everything from the predicted tech death to progressive to doom, all while hitting some moments that are almost ‘core influenced and even some blues/stoner bits. Sounds like a mouthful eh? It works within the framing of the four songs available here. From the plodding opening to “Broken Teeth” to the progressive exploration of “”In Gold & Blood” (with some cool spacey synths to boot) to the almost rock-ish groove of “Ocean Bed,” there’s a little bit of something here for everyone. Vocally things are just as diverse, going from growls to screams to some clean singing. The clean vocals are unfortunately the weak point currently, and there are moments on “Scythian Aurora” and “In Gold & Blood” that they just get too nasally and may be a bit off-putting to some.

A surprisingly diverse debut from a band that could easily blossom into their own over the next few years. With a bit of tightening of some of the transitions and just a tad more development of the clean vocals, there’s nothing really stopping these guys from being on the same level as a band such as Between the Buried and Me.