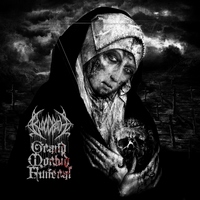 Well, he’s no Mike or Pete, but he passes as Bloodbath material by most standards. We all know that Bloodbath’s not-so-secret vocalist is now Nick Holmes (Paradise Lost) and the worldwide response has been ecstatic, I think they’ve received more backlash and criticism than any other band last year! What do I say? I say the new Bloodbath is gut-punching and brutal as ever, it’s certainly a new age for the kings of carnage. But, there is one issue. Nick is a great vocalist, don’t get me wrong, but something just doesn’t seem right, something doesn’t fit and many might not realize it. Did anyone else notice (or care) that Nick Holmes isn’t Swedish? After all, Bloodbath has always been recognized as a “Swedish Death Metal” band. At least they’re still a killer band and Grand Morbid Funeral is a great album, as expected, so we can (or should) get over the Nick thing, right?

One thing that disappoints me is though they call it Bloodbath, “new” Bloodbath with old Nick Holmes doesn’t come close to matching the addictive essence of “old” Bloodbath with Mikael Åkerfeldt or Peter Tägtgren. Grand Morbid Funeral simply does not, cannot, compare to albums like Resurrection through Carnage or Nightmares Made Flesh. As much as they’ll receive recognition just for being Bloodbath, some might’ve actually liked this album better without all the distractions/obscurations of the Nick-drama. Taking a look at Grand Morbid Funeral from a musical perspective, I give it props for being heavy as all-giving hell, bone-grinding and mind-warping with sick perversions, what more could we ask for? Again, it’s not the best but it’s pretty good.

There are a couple oddball reasons why “Total Death Exhumed” is one of my favorite songs. As a poet, I really admire the lyrics’ complex rhyme schemes. As a musician, I’m stoked by the hard-hitting bass and the gnarly guitars. As I said, I like the lyrics but I honestly think I could’ve done a better job as a vocalist, just don’t tell ol’ Nick I said that… Another notable song is “Grand Morbid Funeral.” Once again, I applaud the instrumentals. However, this song has a more delicate composition than the other ten tracks because it has one prominent feature that the others lack and that’s an atmospheric intro and outro. More than that, it contains some of Nick’s nastiest, deepest, grandest growls.

So, when I’m asked about my opinion on the new Bloodbath, I feel like I’ve got one foot in the water and one on land. To sum it up, I think I figured out what the core problem is – The album is okay, Nick Holmes is okay. So what’s the problem? Nick Holmes isn’t Swedish. All the members of Bloodbath have always been Swedes. But, this Nick-drama isn’t worth wasting energy on. We’re better off cranking the stereo and raging to some morbid death metal with Bloodbath and their latest album, Grand Morbid Funeral. It’s the new Bloodbath. Case closed.