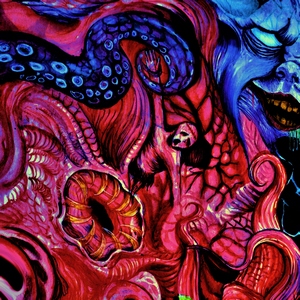 It’s all about the little things and nitpicking the hyper specific when it comes to checking out the plethora of bands attempting to pull off the old school death metal sound. Chilean act Blood Oath are newcomers to the scene, having only a demo and single to their name before The Line Between was released. But the little things in their sound were enough for Unspeakable Axe to pick them up and reissue the tape EP The Line Between on CD (as well as a wider release) for all to check out.

Observing the rites and pathways of bands like Autopsy and Death before them, Blood Oath is genuinely rooted in the ways of the old ones. They have a dark and gritty feel that easily takes one back to the early years of the genre with atmosphere alone. But, they do acknowledge that just because they are playing an older style, they don’t have to record it like it came from ‘the good ole days.’ Instead, the sound is meaty yet still vintage, while having a surprisingly solid clarity. The bass is effectively prominent at times, which is a pleasant change of pace compared to many in this style. There’s also plenty of crisp and assertive solos in each track – in fact, they are one of the highlights that should give the band a bit more of an audience going forward. The riffing is equally top-shelf, which catchy rhythms and spiraling/complex moments coming together in a good ratio. Listening to a song like “Putrid Pile” makes it evident that the band possesses some quality musicianship and it’s not the usual drunken mentality of “let’s play some old school death metal!”

While lovingly old school in tone, The Line Between holds plenty of promise as the band expands themselves (perhaps with a full-length). The songwriting is there already, even with the small amount of material the band has to date. An easy recommendation for those in need of old school death metal jams.