Blindfolded and Led to the Woods – Nightmare Withdrawals (Self-Released) 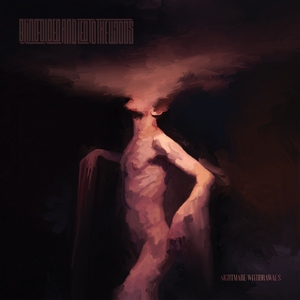 For all the death metal that comes through the inbox, it’s really hard to distinguish between some of it. So many easily classifiable bands playing familiar sounds, which is not a bad thing in some ways (nothing wrong with some straight-up heaviness from time to time), but it is always nice to see something that stands out a little more. Blindfolded and Led to the Woods offer a more unique and intriguing take on the genre with Nightmare Withdrawals.

What makes Blindfolded and Led to the Woods stand out is how they pull from a number of different sources in crafting a rather dark and ‘out there’ version of extremity. There’s some eerie, dissonant vibes that will draw in some Gorguts and Ulcerate devotees, but there’s also some utter quirkiness a la Pyrrhon or Cephalic Carnage that shouldn’t be understated either. It’s no imitation of either band, but the way that they seamlessly shift between different moods and explosive eruptions of sound will make one thing of those bands. Some death/grind-y moments help the band veer into different directions and give some more immediate hooks aside from the dissonant riffing, occasionally coupled with some technical elements, and you can see how the band is able to constantly shift. They also manage to conjure a decidedly evil feeling too – something that is less of a mainstay in the genre as the technicality button is held down further. The swirling together of all of these pieces is what makes for a compelling listen, and you can really grab any track as evidence – we’ll just go with “…And You Will Try to Speak” as it also contains a nice atmospheric moment on top of the almost dizzying tempos and jarring riffs and the outerworldly dissonance.

Nightmare Withdrawals is a real treat for those seeking death metal that doesn’t fit into an easy category. Instead, the band takes a variety of influences and molds them into something that can be oppressively heavy, yet still feels like it takes you on a dark journey into the unknown.