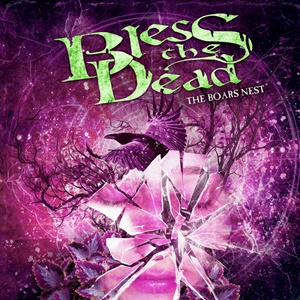 Together for five years and issuing two previous EP’s, Bless the Dead assembled as a result of mutual respect from other Atlanta bands, determined to fuse a sound that differed from what the quintet did in the past. The Boars Nest is the band’s latest release, their first for Sliptrick Records, and certain to cause commotion because of its fusion of metal, punk, and alternative/southern groove influences. The ideal of diversity and pushing boundaries appears to be built into the band’s philosophy, with the lyrical content tackling personal issues and situations that need to be explored and handled in moderation – be it desire, thirst, or appetite-related.

You can expect jagged sonic elements pushing and pulling from all sides – where a crunchy rhythm can have a side course of bluesy, almost slide-guitar action as the double bass, mid-tempo drum part churns along during “Silent of the Night”. The band’s southern, Down/Corrosion of Conformity side becomes apartment early on for the beginning strains of “Drinking Me” – although the barking, forceful vocals of Noah Welborn subscribe to more of that Phil Anselmo meets Deftones outlook. When the band choose to lock into a specific hook and build upon it through progressive snare hits or staccato-driven guitar sequences, the results can be mesmerizing especially during the Clutch meets Faith No More against Sabbath gloom for “Kiss the Earth”.

And yet for all this musical diversity, there are times when you wish Bless the Dead would tighten up a few loose ends that can be a detrimental to the overall final product. It can be a case where the clean melodies come off too raspy or off kilter during “Sex Sells”, or the odd combination of alternative guitar picking against a lower moan build up verse for “Whiskey Whore” – the latter becoming more of a heavier, semi-thrash meets southern groove hook monster. You just get the feeling that these musicians embrace dynamics and the need for a multi-genre influence tree to pick from – it’s more a question of solidifying and streamlining where to put what for cohesion top to bottom.

The Boars Nest is a tidy little affair at seven songs in under twenty-eight minutes – at this point though, probably more something to enjoy live and hope for a stronger output the next go around.