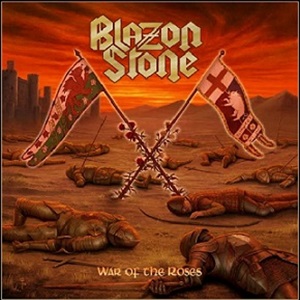 Tribute bands being a prevalent part of the live local circuits these days, it’s not shocking to see musicians taking things one step further and developing new songs with a particular niche homage to honor one artist. Blazon Stone began as a side project of Cederick Forsberg, a Swedish metal musician with a never-ending well of recordings already out at only 27 years of age (check Metal-Archives for the list of bands and albums). Feeling the need to express his love for German power metal group Running Wild, Blazon Stone has released two full-lengths since 2013, as War of the Roses represents the third foray into pirate themes and war-chest, culturally driven material.

If you know going in what you love about Running Wild – which for most is a thick Celtic-oriented guitar hook foundation, equally passionate vocal melodies over the top, plus a rhythmic element that is 100% pounding in the metal corner, then Blazon Stone will re-vitalize your love for the band. Especially in terms of the catalog from 1989-1998 (Death or Glory to The Rivalry). Ced as a guitarist, bassist, drummer and main songwriter flies the flag of Rolf Kasparek’s influence loud and proud, delivering catchy anthems at a mid-tempo to slightly faster variety. Opener “Born to be Wild” wastes no time getting to the speed rhythms, quick hitting guitar harmonies, gang background vocal accents, and thunderous double bass with occasional gallop transitions – while at other spots the heads down Priest-like “Stay in Hell” should raise fists in studded allegiance to the cause.

New singer Erik Forsberg has a clearer, definitive range that elevates many of the melodies to greater heights than imaginable – “Voici La Grande Peur” has a rapid-fire verse nature where he needs to go from zero to fifth gear in mere seconds, while “By Hook or By Crook” takes a page out of The Prisoner series (Iron Maiden made famous) for another higher delivery treat. Although most of the songs are fairly compact, the final epic title cut at almost ten minutes gives Ced ample chance to set up a lengthy aural feast – low background vocal and bass start, the playful instrumental interplay, and a tempo transitional uptick midway through that allows Ced to trade between the melodic foundation as well as shred a bit before returning to a mid-tempo marching template as the guitar harmonies reign supreme.

War of the Roses should have been The Rivalry follow up – capturing an energy and creative breeding ground that the originators missed the mark on for most of the 2000’s. 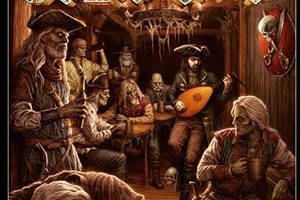 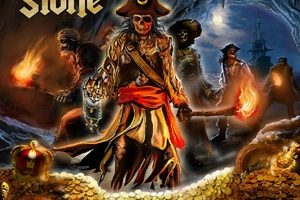